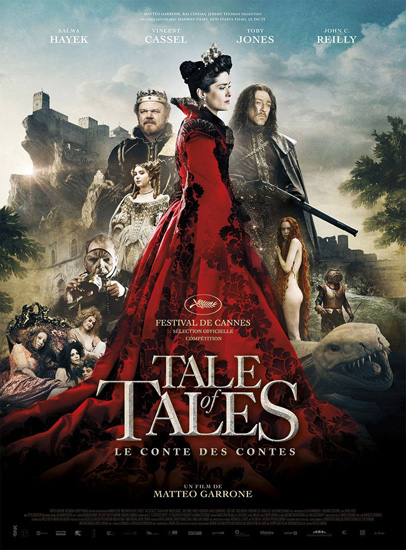 Sea monsters, monarchs, ogres and sorcerers. Salma Hayek and John C. Reilly star in this breathtaking Baroque fantasy from the visionary director of “Gomorrah.” “Tale of Tales” is based on 3 spellbinding stories of magic and the macabre by 17th-century folklorist Giambattista Basile. It unleashes a barrage of mind-bogglingly gorgeous and fantastical imagery as it brings to life the (mis)adventures of 3 kings. In the kingdom of Darkwood, the King (John C. Reilly) and his Queen (Salma Hayek) attempt to conceive a child through very unusual means. Meanwhile, in Highhills, the none-too-bright monarch (Toby Jones) marries off his daughter to brutal ogre while developing a strange obsession with breeding a giant flea. The sex-obsessed crown of Strongcliff (Vincent Cassel) is in for a shock when the woman he falls in love with is not quite what she seems. This intoxicating cinematic spectacle is full of surreal surprises, and a journey into the dark heart of fairy tales.

“Tale of Tales” will be available for 48-hour rental. You can view it in 1080p HD (Blu-ray format) for $10.99 and in standard-definition (SD) for $9.99. DIRECTV CINEMA is a premium pay-per-view service that brings exclusive access to select, new releases before they’re in theaters. Plus get access to 1000s of shows and movies with DIRECTV On Demand.