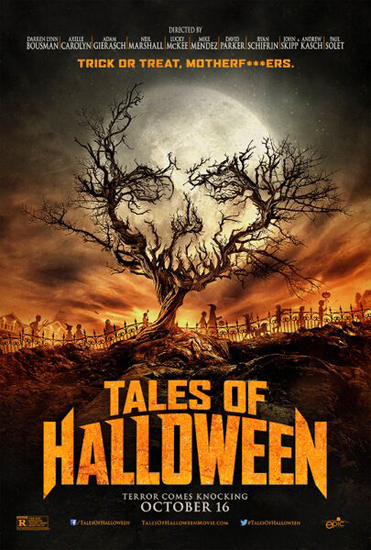 Synopsis: Ten stories are woven together by their shared theme of Halloween night in an American suburb, where ghouls, imps, aliens and ax murderers appear for one night only to terrorize unsuspecting residents.

Our Thoughts: Tales of Halloween offers a variety of gory, comedic stories in an inventive anthology collection that is sure to become a Halloween tradition for many.

Much like 2007’s Trick ‘r Treat, the stories are interlocking and center around one town on Halloween night. However, it doesn’t feel quite as solidly connected as Michael Dougherty’s film was. In Tales, Characters from other stories briefly cross paths with each other, rather than having meaningful interactions. Despite the similar idea and format, the comparisons end there. Both are unique and entertaining in their own ways. Fans of either film are likely to enjoy the other.

Adrienne Jo Barbeau, the actress known to horror fans as Stevie Wayne from The Fog, narrates the film in another role as a Radio DJ. Other nods to classic horror include a candy called the “Carpenter Bar.” Additionally, there are cameos by famed horror directors Joe Dante, John Landis, Stuart Gordon, Mick Garris and Adam Green.

Tales of Halloween offers more than most anthology films, with ten stories in it’s collection. Each story is quickly and efficiently executed. The macabre mood of Halloween is perfectly depicted with creepy atmospheric effects and sound. An impressive variety of horror genres are represented, with stories centered around ghosts, to demons, zombified slashers, aliens and fairy tales.