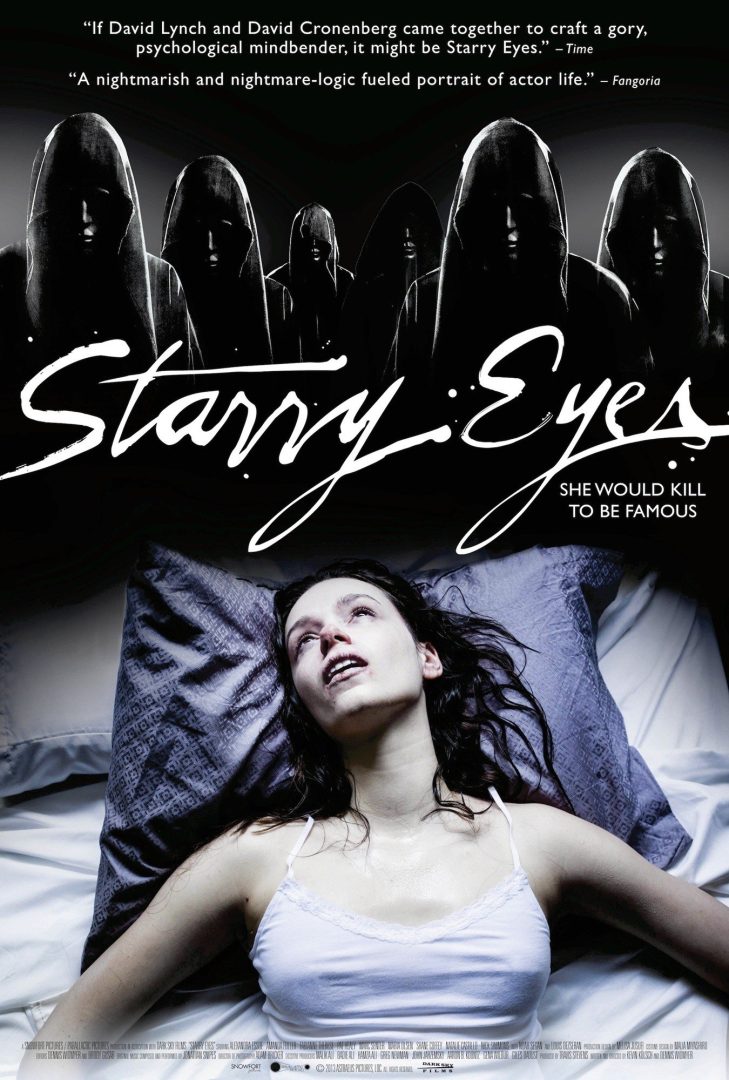 The question that Starry Eyes poses is, just how far will our young heroine Sarah go to achieve the fame that she so desires? The answer, as I’m sure you can guess, is way too far.

We can see from the start that Sarah is dedicated to honing her acting skills and that she is desperate to land that perfect role which has thus far eluded her and would boost her to stardom. To make ends meet she’s forced to work a crappy waitress job at a Hooters type restaurant for a boss (played by indie legend Pat Healy) who reminds me of the manager of Chotckies in Office Space. He constantly tries to convince Sarah that her job is more important than her aspirations to be a working actress and he also isn’t above gaping at her ass as she walks away.

Sarah, however, feels that she’s destined for far more but she is plagued by her insecurities and surrounded by faux friends who make her feel bad about herself and make her question her chances at celebrity; one in particular, is so chock full of passive/aggressive remarks toward Sarah that I think I actually yelled from my couch for Sarah to hit her at one point.

One day, Sarah lands an audition with an apparently well known production company called Astraeus Pictures for the lead role in a horror film titled The Silent Scream. In front of the creepy looking casting director and her snotty assistant, Sarah seemingly gives a good performance but they blow her off with the patented line, “we’ll be in touch”. After being shut down when she asks if she can do it again and differently, Sarah picks up her bag and heads off into a bathroom stall. Here’s where things start to take a turn because when I was expecting her to sit down and have a good cry, which would be normal, she instead began to pull out a chunk of her own hair before standing up to scream and beat on the walls of the bathroom stall with her bag.

When Sarah opens the stall to leave, she is greeted by the creepy casting director who invites her back to the audition room so she can give a repeat performance of her bathroom stall fit which they seem to love. Her “friends” and roommate are all impressed when she divulges who she’s auditioning for (except for Ms. Passive/Aggressive) so we’re lead to believe that this is a very big deal for Sarah indeed.

Much to her delight, Sarah gets a callback and dresses her best to head over for her second audition; little does she know that she need not have gotten dressed at all as they make her get naked for no apparent reason. Here’s where we realize that a sane person probably would have backed out of this film at the point where they asked her to throw a fit for the camera and I assure you that things get crazier as the film goes on.

Take a cup of Rosemary’s Baby with a tablespoon of The Fly and garnish it with a bit of Contracted and you’ll almost have Starry Eyes. Please don’t think that’s a bad thing because it’s not at all. This movie is beautifully done and wonderfully creepy.  The performance of Alex Essoe as Sarah is nothing short of inspiring. Writer/directors Kevin Kolsch and Dennis Widmyer manage to take the classic tale of a girl doing whatever it takes to make it in Hollywood and then they add such a fucked up and freaky twist to it that I’ll be recommending this film to friends for years to come.