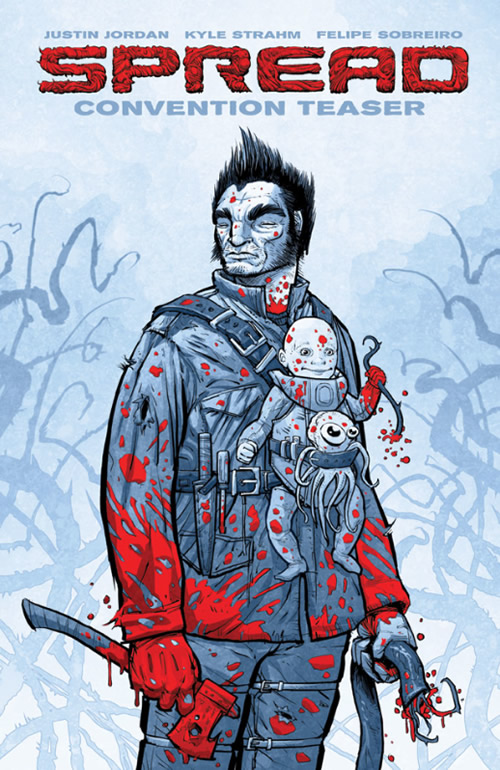 Ten years ago, humanity dug too deep and unleashed something ancient that couldn’t be controlled. Something that couldn’t be stopped, twisting everything it touched into more of itself. The Spread. Humanity was nearly destroyed before finding a way to slow the Spread to a crawl. Now, deep inside the quarantined zone, one man has found what might be the key to stopping it forever: a baby girl. And if he can save her, he might save the world.

We caught up with writer, Justin Jordan, to talk about the upcoming horror comic, SPREAD.

Horror News Network: How did the concept for this book come about?

Justin Jordan: Like many of life’s great questions, the answer is zombies.

Heh, that’s actually true. I was thinking about zombies, and I was thinking that it’d be interesting to have a Lone Wolf and Cub style pairing of badass adult and child wandering around a post zombie landscape.

But I didn’t really want to write a zombie thing since, for one thing, Robert Kirkman really has that sewn up with The Walking Dead.

Then I read something that talked about how the energy system that all cells share, the way energy is actually chemically produced, is hypothetically not the only one that could have existed. And it’s actually possible that a more efficient system existed, and that it was chance that we ended with what we have.

Now that got me thinking – what if an alternate ecosystem came about on Earth? Something that was better or at least hardier and more virulent than what we have?

And that merged with the Lone Wolf and Cub type idea to give us Spread.

Horror News Network: What can you tell us about this “virus?” known as the “Spread”?

Justin Jordan: Well, it’s not a virus, precisely. I can tell you that it creates monsters, and is very, very difficult to stop. To the point where nukes might not do the job.

The best humanity has apparently managed is to slow it down, and quarantine the area around it. This is where the book is actually set, in the quarantine zone, which is most of the West Coast, where the survivors haven’t had any contact with the outside world in ten years. They’re not even sure there IS an outside world.

Which I really an answer for the actual question. What exactly the Spread IS and what it’s doing are central questions for the book itself, and not ones I want to spoil too soon. But the Spread is bad news for everything that’s already alive.

Horror News Network: Can you give us a little bit of backstory on the main characters in this book?

Justin Jordan: Well, you eventually have four main characters: No, whose name isn’t really No, Hope, who is the baby who can maybe save the world, Fat Jack, who has managed to be fat in a post apocalyptic setting, which should really worry you if you think about it, and Crazy Molly, who’s kind of Hope’s surrogate mother and nanny. Also, crazy.

No’s actual name is Sean Shields, he just gets called No because it’s an awful lot of his dialogue. He voluntarily stayed behind when the quarantine went into effect for reasons of his own. He’s Spread immune, which means he can’t be converted by the Spread. He can still be torn into small irregular bits by it though. He’s incredibly tough and really dangerous, but he doesn’t really have a clue what to do with Hope.

Hope is, well, a baby. But she’s pretty awesome, anyway. Oh, and she might be able to save the world.

Fat Jack is a British ex biker (he’d be a current biker, but after ten years of quarantine, there’s no gas around) and how he ended up in the quarantine zone is a story unto itself. He’s funny and brutal and intensely self interested.

Crazy Molly is young, and mostly grew up after the Spread. She was about ten when the Spread hit, so she’s adapted to life in the QZ. Unfortunately, something very, very bad happened to her just prior to the start of the series, so her current grasp on sanity is…loose.

Horror News Network: What can we expect from thsi book in terms of scares?

Justin Jordan: Well, there’s a whole lot of body horror, which you can see right from the start and given the nature of the Spread, you’re going to see a lot of that. There’s also the horrible shit we humans get up to when the world.

So, hopefully, it’s a scary book. That’s a hard thing to do in comics, so I am hoping we can pull it off.

Horror News Network: Can you talk a bit about the artwork of Kyle Strahm on this series?

Justin Jordan: It’s amazing. Kyle was the first and only choice for the book. He’s got a great gritty, dirty style with a generally sort of twisted feel to it, and that’s perfect for the book. There is some seriously messed up imagery in the book, which he just nails.

Horror News Network: Is this scheduled to be an ongoing or mini series?

Justin Jordan: Ongoing. I’ve got about fifty issues worth of stories, and I hope we get to tell them.

Horror News Network: Can you talk a bit about the SPREAD contest that is happening?

Justin Jordan: We’re doing a pretty cool and, thus far, pretty popular campaign where people can post our teaser image or our cover, along with the tag #ItsSpreading and get entered to win…well, various things, but the main is actually being IN the book.

If you’ve ever wanted to (most likely) die horribly in a comic, now is your chance!

Horror News Network: In closing, what would you like to tell our readers about this book?

Justin Jordan: That I hope they read it? It’s a gruesome, action packed, hopefully scary book, so if you’re anything like me, you’ll dig it.

Horror News Network: Thanks for your time, Justin. Best of luck with SPREAD!