Split appears to be the big winner this winter season, not only muscling out fellow horror films, but all new releases as well.  Bolstered by a young teen audience and undeterred by underperforming action films such as XXX: The Return of Xander Cage (a $33 million return on a $85 million dollar budget), Split looks to continue to grab more cash in weeks to come.   It will face more competition over the next few weeks with Rings (and a number of smaller releases such as Don’t Knock Twice) debutting next weekend.  At this point, it will depend if audiences remember (and want to see) a third film in the franchise after 12 years or if horror fans will respond to the film with apathy, similar to last fall’s Blair Witch remake.  Next week’s Superbowl is also a factor, as studios traditionally release films that appeal to women in the form of horror movies and romantic comedies.  Will ticket buyers who wish to escape Superbowl hype choose the reigning champ or yesterday’s creepy hit next weekend?  Stay tuned to Horror News Network to find out! 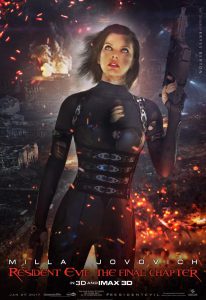 On the other side of the spectrum, Resident Evil: The Final Chapter showed that producers may have wanted to end the series at five installments. Although Resident Evil as a franchise has been able to avoid the deadly “video game curse” (and you can read Matthew Chernov’s excellent article about this trend at Variety.com), the film was only able to dig up $13 million in sales.  This total is down from Resident Evil: Retribution which earned over $21 million in its first weekend in September of 2012.  Resident Evil films do tend to perform better overseas (particularly in Japan where the film has already grossed $33 million since December 23rd, 2016) but producers can’t be happy with a soft debut such as this one and more horror and action films on the way in February.