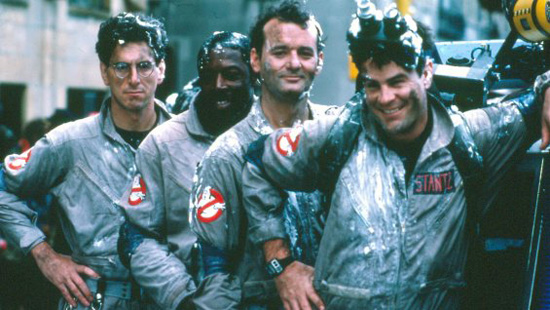 Sony is creating a ‘Ghost Busters’ cinematic universe, with the formation of it’s Ghost Corps, a collective headed by ‘Ghostbuster’ veterans Ivan Reitman and Dan Aykroyd. Reitman, who directed the original films, and Dan Aykroyd, star of the original films, are going to oversee the expansion of ‘Ghost Busters’ from a movie franchise, to a cinematic universe that includes television and merchandising.  The first move planned is a new all male ‘Ghostbusters’ film that will be released after Paul Feig’s all female cast film, starring Kirsten Wiig and Melissa McCarthy, which is coming to theaters July 22, 2016. Joe and Anthony Russo (Captain America: The Winter Soldier) are going to produce and direct the new film, with Drew Pearce (Iron Man 3) writing the script. Channing Tatum is also producing along with Reid Carolin and Peter Kiernan, whom he partners with. The team is hoping for Tatum to star in new film as well, which Reitman will also produce. The plans with Sony are so serious that Reitman has put his whole staff from his production, company The Montecito Picture Co., on the Ghost Corps project.