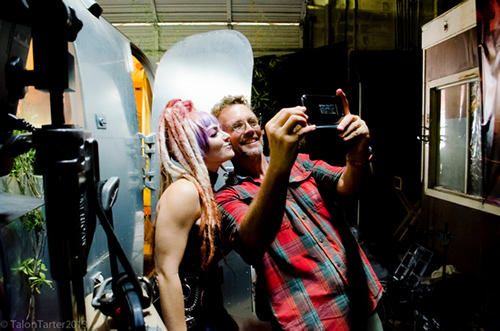 Horror News Network: How did you come up with the idea for SMOTHERED?

John Schneider: It had to be 20 years ago when a friend of mine suggested that someone invert the horror model. He thought having serial killers systematically attacked by a college coed would be hysterical. I agreed but what was missing was the catalyst that got them all together on a camping trip.

While spending time with Richard Brooker and other horror icons in Dusseldorf, Germany, I realized that the answer was sitting at the bar in front of me! When I asked Richard and several others if they would leave the show for the promise of $1000 for the weekend to haunt a trailer park, the immediate response was yes!

Horror News Network: Have you always been a horror fan?

John Schneider: I have always been a fan of horror films. I believe I caught the bug from my mother. One of the first magazines I remember ever reading I believe was called Horror. I seem to remember Boris Karloff being on the front. One of my first super 8 movies that I purchased in black and white was a horror film called The Curse of.. Something. All I remember is a lion like horned monster coming out of the steam off a train. I was also a big fan of the House by the Lake with Don Stroud.

Horror News Network: Lets talk a bit about the cast for this movie. The team you put together is nothing short of horror legends. The movie features Kane Hodder, R.A. Mihailoff, Bill Moseley, Michael Berryman and more. Can you talk a bit about getting that cast together?

John Schneider: Getting the cash together for the film was actually not that difficult. Kane and I had worked together decades ago on the Dukes of Hazzard. I had also worked with Richard Brooker on the Dukes of Hazzard. After can read the script he immediately volunteered to get it to several of the other actors. After each of them read it I was very honored that they all responded favorably with a resounding “Why hasn’t anyone thought of this before?”

The very odd part about it all is that I had originally begun the script for Richard Brooker to star in. Halfway through the screen writing process Richard, sadly, passed away. I immediately contacted Kane who asked that I send him the script. He responded within 24 hours but with this one question: “Are you telling me that I wouldn’t have read this script if Richard had not died?” My answer of course was “Yes.” Adding to the mystery is the fact that Kane and I have the same birthday and Richard died the day before it.

Horror News Network: Some behind the scenes images have recently been released of SMOTHERED. Those images seemed to show a lot of fun happening on set. Can you talk a bit about what its like on set?

John Schneider: Working with all of these guys was a delight. The girls (Shanna Forrestall, Amy Brassette and Brea Grant) fit right in as well. When you mass this kind of experience and talent all in the same Minnie Winnie, it is nothing short of horror legend in the making! I have never worked with a more professional group of people in my life. I do believe that much of their professionalism stems from the fact that many of them have done stunt work. Folks who do stunt work sometimes don’t make it home at the end of the day. That element brings out an excitement in their work that you don’t necessarily see or experience in other departments.

Horror News Network: When can we expect to see this film available?

John Schneider: My hope is that the film will come out in March of 2014. But that of course, is up to whoever the distributor is going to be. There are several distributors looking at the film now and I have every expectation that several of them will want to get on board. Remember, this is one of those “Why didn’t I think of that?” kind of movies!

Horror News Network: In closing, what would you like to say to our readers about SMOTHERED?

John Schneider: The main thing I want people to know is that this movie is not a spoof. It is a serious look into a very bad weekend shared by great friends who also happen to be iconic horror stars. This is in no way like Scream or Scary Movie. It is a gruesome must see horror comedy.

Horror News Network: Thanks for your time, John. Best of luck with this movie.