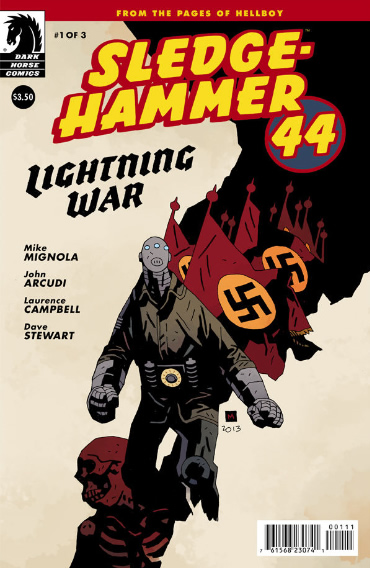 Synopsis: After the classified, advanced airplane known as the Flying Wing is hijacked by the Nazis, Sledgehammer is sent on a special recovery mission that pits him against the deadly Black Flame!

Our Thoughts:  There are very few historical events that complement a comic book backdrop as well as World War II.  No other war in history has ever been properly defined as simply, a battle of “Good” versus “Evil”.  The events that took place during that time period were so catastrophic and unprecedented that it almost seemed like something right out of a Hollywood script.  Between my fascination of early Captain America comics and my many hours spent raiding Castle Wolfenstein on the PC, WWII history blended with fantasy has always been something I enjoyed.

Sledge-Hammer 44 “Lightning War” #1 was an entertaining example of how well comic book fantasy and World War II can blend together.  Mignola and Arcudi’s writing creates that familiar ominous feel that has made WWII and comic book fantasy such a successful pairing.  The protagonist “SledgeHammer” and antagonist, The “Black Flame” are equally enigmatic and both make you want to follow the series solely to uncover their origin.  Laurence Campbell’s sharp and gritty artwork brings diabolical life to this series and does well depicting the darkness that was the WWII era.

“SLEDGE-HAMMER 44: LIGHTNING WAR” #1 was a great entry issue to what seems will be a mysteriously historical comic book series.  The team of Mignola, Arcudi and Campbell are adding much depth to the Hellboy mythos with this title and it is most definitely worth a look.  SLEDGE-HAMMER 44 LIGHTNING WAR #1 is in stores NOW!