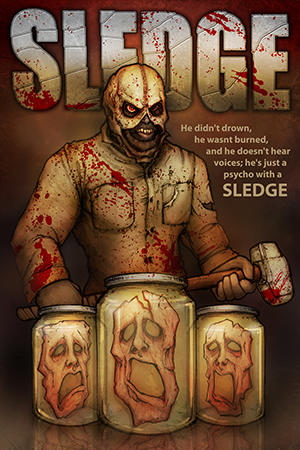 Synopsis: Sledge hits you from the beginning with humor and originality. Opening with Assly’s True American Horror television program, the action kicks off instantly with skull crushing deaths from the killer known as Adam Lynch. Adam believes he is in a movie and video game. With each kill he adds to his collection of human faces. As a group of friends show up to a secluded campground, Adam meticulously watches them all to see if any are worth sparing. They begin their camping trip with booze and sex, and ends with you screaming and laughing. Sledge is one killer you don t want to mess with.

Our Thoughts: Sledge is an amusing new slasher film that’s so bad it’s good. With a lot of comic relief and satire mixed with blood, it proves to be a very entertaining film about a sledge hammer carrying , masked killer.

The movie starts off with a girl watching a horror show called “Assly’s True American Horror”, which is running a horror flick called “Sledge.” It starts off with three people walking on a trail in the woods, when the two women are bludgeoned to death by a masked killer, who frames the mentally impaired man, Dickie, who was walking with them, for the crime by telling him to put his hands in the woman’s blood and run back to town.

Sometime later, a group of in a Jeep couples are heading to the woods to go camping. Meanwhile, another couple is killed by the same masked man, this time with two sledge hammers. As the couples arrive, the killer is watches them and mumbles to himself whether or not he will let them live for tonight. The group sets up camp, makes a nice camp fire and tells horror stories. Alex, the only single of the bunch, tells a “true” story about a killer named Adam Lynch, who kills people with a sledge hammer, collects the skin of their heads, and is rumored to be still killing people from those very woods. The movie continues on with a mix of gore, comedy, and horror satire.

In between the Sledge, we occasionally cut back to the girl on the couch, who receives a phone call about a party or something her ex will be at, saying she’s just staying home and watching the horror show they used to watch. She also mentions how unrealistic and bad the movie is.

Sledge is your classic bad horror movie that knows it’s bad. There are a lot of horror movie references and great satirical humor. Sledge is a B-movie movie embraces that status and you can tell the creators had fun with it, which makes it more enjoyable. The effects aren’t high quality, but get the job done. The acting is decent. Alex, played by, Dustin Bowman, reminds of Seth Mcfarlane in his delivery, with dry humor and raunchy punch lines. Kristian Hanson, who plays Adam Lynch, is equally funny with the goofy gruff voice he uses to deliver his over the top one-liners. Sledge is definitely worth a watch for those who love horror comedy.