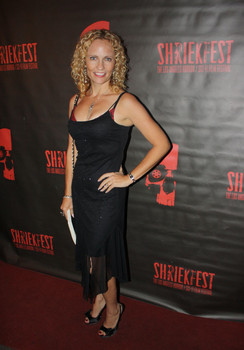 Horror News Network: Shriekfest was founded in 2001. Can you give us a bit of insight about the history of the festival and how it has evolved over the years?

Denise Gossett: Yes! I founded Shriekfest after starring in a horror film, I had been searching for fests to submit it to and I could only find one in Europe and that is how I came up with the idea….something that started from a silly little idea has turned into an event that gets submissions from every country out there…it’s really remarkable to me.

Horror News Network: You’ve been an actress for a number of years in several popular movies and TV shows. How is it different being in front of the camera versus behind the scenes?

Denise Gossett: Oh, I much prefer being in front of the camera…I just come alive when I am acting. Behind the scenes is a lot of juggling, scheduling, delegating, hard work. Acting can be all of that too, it just doesn’t seem as much of a struggle when I perform as managing a film festival.

Horror News Network: Being behind the scenes, how have you seen the role of women in horror, especially, indie horror, change over the last decade?

Denise Gossett: Well, in the 13 years I’ve been doing Shriekfest, I have seen the number of women who are filmmakers and writers grow exponentially! It’s very exciting for women in this genre now. Not only is this happening, but the female roles in the films are now stronger, kick ass, instead of the weak woman who can scream well while her top falls off. LOL

Horror News Network: What can you tell us about some of the indie films that will be featured at this year’s event?

Denise Gossett: Ah, well, we are still in the process of picking the finalists, however I can say there are some really great films, a nice mix of films from zombies to slashers to hauntings. We should know soon and then the schedule will be posted at www.shriekfest.com

Horror News Network: Indie horror has grown tremendously over the last few years. Independent filmmakers seem to have less restrictions and are able to push boundaries more than one from a major studio. Have you ever seen anything in a film that has absolutely shocked you?

Denise Gossett: Oh yes, of course, I am getting to the point where nothing shocks me because I feel like I‘ve seen it all in some form. In one of the first years we received a film and it was nothing but a woman defecating on the floor….not really horror, certainly horrific though.

Horror News Network: With so many great indie films over the last few years, what advice would you give to up and coming filmmakers?

Denise Gossett: If you want to write or make a film, DO IT! Don’t let life’s restrictions hold you back…if it’s experience you need, surround yourself with people who know what they are doing, if it’s money you need, try a crowd funding program, if it’s time, plan out small portions of your day and work towards your dream….anything can be done in baby steps.

Denise Gossett: A lot of parties, a lot of gore, screams, networking, horror actors, fun, and the best in indie horror!