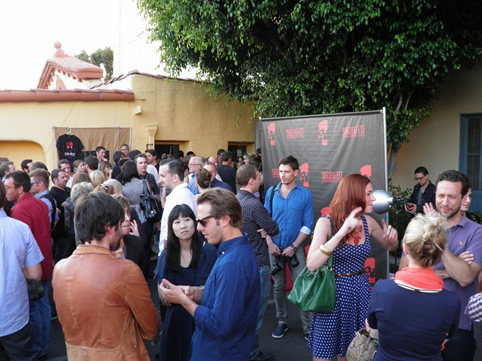 The thirteenth annual Shriekfest took place in Hollywood, California on October 4-6, 2013. All horror fans living in the Southern California area owe it to themselves to attend this film festival at least once. Shriekfest provides a rare opportunity to view horror films and shorts that fans may not otherwise be able to find and the even rarer opportunity to view them with the filmmakers and casts.

For anyone unfamiliar, Shriekfest states that it “celebrates the horror, thriller, science fiction, and fantasy genres. This festival provides filmmakers and screenwriters with a platform to showcase their work.” And does it? Yes, yes it does. Over the course of three days, the festival screened 44 films which included 10 full-length feature films!

The film festival took place in a very plush screening room in a working movie studio, Raleigh Studios. Anyone could purchase tickets to any of the screenings for only $10, or buy a festival pass for all screenings over the weekend for $140. The festival pass also included entrance to the opening night party on Thursday. Short films were placed together in two-hour blocks for ticketing convenience and those short film blocks were a great way to check out a lot of talent on the quick. Much of the audience was comprised of many of the creators and casts of these films. The entrance to the festival and red carpet area was refreshingly friendly and a great place to say ‘hello’ and let everyone know how much you enjoyed the films.

During the course of Horror News Network’s time at the event, we viewed several horror shorts and were highly impressed with what we saw. Making short films is harder than it would seem and the talent of the people involved is clear. We were also able to view the feature film, “Devil in My Ride,” an excellent horror-comedy. Hopefully these films will be available with a wide distribution for all to see in the very near future.

Attendance at next year’s Shriekfest is highly recommended for all fans of horror and especially fans of independent horror movies. Follow them on Twitter @Shriekfest or like them on Facebook to get all of the details for the 2014 event in advance. You’ll be happy you did.