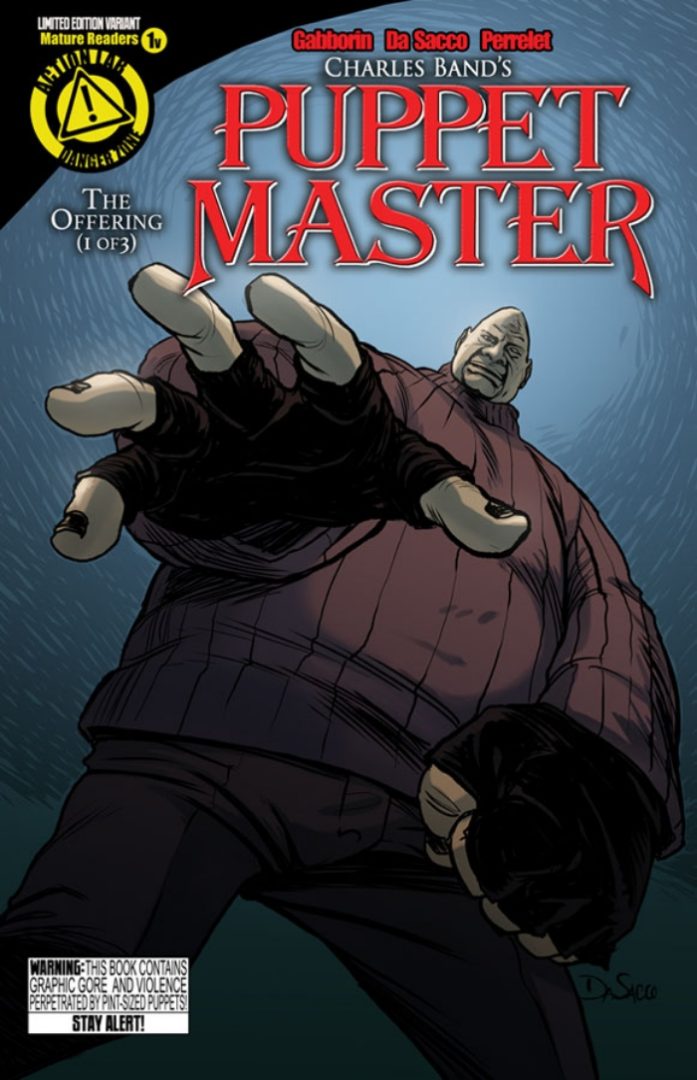 Charles Band’s long-running cult classic horror film series makes its way to the comic page!  When a group of friends sets out to use the abandoned Bodega Bay Inn as a party spot, they find out first-hand that the bizarre local folklore is more truth than fantasy as an army of twisted autonomous Puppets have their way with the trespassing teens!  The Puppets are back, and they’re out for blood!

Mike Peluso caught up with writer, Shawn Gabborin to talk about the upcoming Puppet Master comics.

Horror News Network: As a huge fan of the original Puppet Master film and its sequels I must say I’m very excited about this comic series. What about the premise and mythos of the 1989 film and the sequels inspired you while working on this series?

Shawn Gabborin: Obviously the creative kills! Those are a very important part of the Puppet Master franchise and we have plenty of those. I am dealing a lot with the idea of the souls housed in the Puppets. We know who most of them are from the films, but in the second story arc of the comic we really explore that side of things. I think who they are beyond the Puppet shell is important.

I’m also using a lot of the same locations, such as the Bodega Bay Inn, and others that were simply mentioned (I’ll leave that one for the “tots an teens” to guess at).

The Puppet Master movies have a certain atmosphere that I’m trying to capture. Each arc is fresh and different from the previous one, but that atmosphere is overarching it all.

Horror News Network: I understand the original creator of Puppet Master, Charles Band is involved which is awesome to hear for the cult following of the films. What was it like working with him and what did he contribute to the comic series?

Shawn Gabborin: It has been great working with Charles Band. He gets final approval on everything, but has been very open to letting me tell the stories I want to tell. As a 20+ year fanboy, having the creator of the franchise giving me a thumbs up on my stories is pretty damn cool!

Horror News Network: The artwork released so far from the series is stellar! What were some of the things you and Michela Da Sacco discussed while planning the series and what do you feel about her art style suits the world of Puppet Master so well?

Shawn Gabborin: Michela and I talked a bit about the tone of the book, character designs, how certain Puppets act, that sort of thing. I had worked with her previously on a few short stories I self published, so I was aware of how she handles a script and felt confident she’d do great on this book. I’m so glad people are digging what she’s doing as much as I have!

I think what makes Michela’s art work so well is that her art style is just to the left of realistic. And that’s really what Puppet Master needs. It’s realistic enough that you can view the characters as people rather than cartoons, but has just enough of that comic book flare that, when something fantastical happens, it doesn’t seem out of place. It looks just as real as the rest of the book. If you like what you’ve seen from her so far, just wait until you get into some of the more creative kills!

Horror News Network: I always loved the transition of Taluon’s macabre marionettes from evil minions to almost antiheroes. What sort of role will they play in the comic series?

Shawn Gabborin: The Puppets will be playing both roles as the series progresses. Sometimes they’ll be villains, sometimes they will kill for a greater good… it all depends on who is pulling the strings at the time. But that’s something that’s great about the Puppets, right? They can be played on either side of that moral fence and still work.

Horror News Network: Over the many Puppet Master movies we have been introduced to a slew of unique and menacing marionettes. Which ones can we expect to make an appearance in this comic series?

Shawn Gabborin: The comic will focus on the primary eight puppets: Blade, Pinhead, Jester, Leech Woman, Tunneler, Torch, Six Shooter, and Decapitron. Other puppets from the series will make appearances and play roles here or there, but those eight are the focus.

Horror News Network: Were you a fan of the early films from late 80, early 90’s and what about them drew your interest?

Shawn Gabborin: I was eight years old when the first Puppet Master movie was released. I don’t recall when I was first introduced to the series, but I can say I was hooked from that first viewing! At a time when most horror movie killers were slasher or demons (both of which I love!!), the idea of these toys running around killing people was so new to me! That’s not to say there weren’t “killer doll” movies prior to Puppet Master, but it certainly was my gateway into that subgenre… so for me it was the first. Couple that with the crazy kills the Puppets were doing, and there was no turning back. I was all in.

Horror News Network: Will there be variant covers released with the series?

Shawn Gabborin: Yes, each issue will have a few variant covers. For the first seven issues we are focusing the variants on the eight main Puppets, issue #1 having both Blade variants and Pinhead variants, and the next six issues having one puppet each. Each Puppet will receive a full color variant, a sketch variant, and a photo variant! We will be working with retailers to offer Store Exclusive covers as well.

Horror News Network: Aside from Blade who is the obvious fan favorited puppet, who where some of your personal favorite marionettes from the Puppet Master movies?

Shawn Gabborin: Growing up, Blade was definitely my favorite. He is just such a cool design and built to kill! But in recent years Pinhead has taken over that number one spot. Sure, he’s not the prettiest thing, but seeing him sitting on a shelf doesn’t invoke the “what the Hell?” that Blade or Tunneler would. So knowing what Pinhead is capable of while looking almost cuddly just adds to to the tension when he’s around. Jester is always fun. Six Shooter was a very creative Puppet. I have a soft spot for all of them… but Pinhead is number one.

Horror News Network: The original Puppet Master, Andre Toulon and his Egyptian black magic I feel added such depth and mysteriousness to the films backstory. Can we expect him to make an appearance in this comic series wether it be in the form of a flashback of some sort?

Shawn Gabborin: When the “current timeline” films left off (with Puppet Master: The Legacy), Andre Toulon’s soul was in the Decapitron Puppet, who is one of the main eight Puppets I’m using. So he will have a presence as a Puppet… beyond that I can’t go into just yet!

Horror News Network: In closing, what would you like to say to our readers about the upcoming Puppet Master series?

Shawn Gabborin: Picking up this license wasn’t about acquiring an established property, it was about giving back to a series that helped make me love horror. I am a life-long fan of not just the Puppet Master franchise but of Full Moon in general, so I am coming at these stories with nothing but love for the characters and respect for the franchise. If you like kick ass art, crazy kills, and a story to go along with it… I hope you give us a shot!

Horror News Network: Thanks for your time, Shawn. Best of luck with the Puppet Master comic!