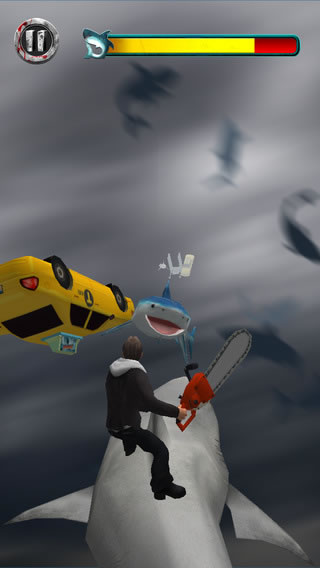 Developer Other Ocean (Dark Void Zero, #IDARB, NBA Rush), in partnership with publisher Majesco Entertainment Company, today announced that Sharknado: The Video Game is now available for download on iOS. Based on the film sequel “Sharknado: The Second One,” players assume the lead role as Fin as they race to destroy a series of shark-infested tornadoes threatening New York City in this thrilling action-adventure game. The game is available in North America starting today for $2.99, in anticipation of the film’s Syfy premiere on July 30.

“The Sharknado movies already exhibit a strange video game logic, so translating them into a work of interactive art wasn’t much of a challenge,” said Sharknado: The Video Game Director Frank Cifaldi. “We still have a soft spot for the licensed games of our childhoods, the ones that took a lot of strange liberties in the name of fun, and I think we’ve succeeded in bringing that feeling to the 21st century.”

“We still haven’t seen the ‘Citizen Kane’ of video games, but at least we have our Sharknado,” he added.

In Sharknado: The Video Game, players will:

To learn more about Sharknado: The Video Game visit: www.sharknadogame.com