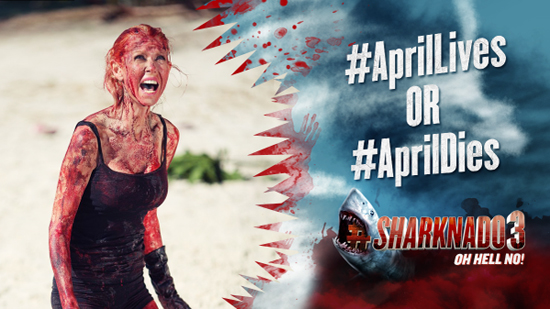 ‘Syfy gave viewers the chance to decide April Wexler’s fate at the end of last night’s ‘Sharknado 3: Oh Hell No!’  ‘Life Or Death? You Decide!”  Syfy said, and told viewers that could also vote at Sharknado.syfy.com.  The network added “Her fate will be revealed in Sharknado 4 … because we’re not done yet!”

The phenomenon that is ‘Sharknado’ began July 2013 with 1.4 million viewers for it’s premiere. Those who didn’t watch, heard about it on twitter. ‘Sharknado’ was and is really all about the tweets and it trended once again.