How did The Shallows Earn a 77% Score on Rotten Tomatoes!?

“Lean and solidly crafted, The Shallows transcends tired shark-attack tropes with nasty thrills and a powerful performance from Blake Lively.”

Sounds promising, doesn’t it? After following the critical and financial success of the movie, I decided to pick it up on Blu-ray, hoping it would be more like Jaws and less like Sharknado. Instead, I was surprised to discover a movie that contains the following scene: 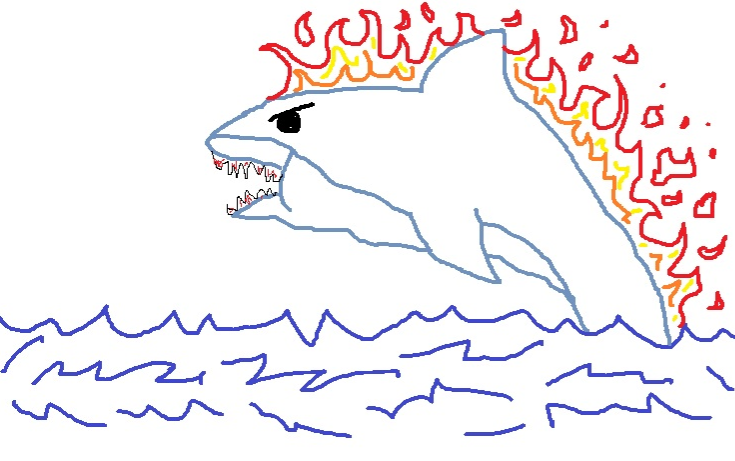 That’s right: the climax of the movie depicts the shark flying through the air, engulfed in flames as it barrels towards the protagonist. While I had to resort to this artistic recreation of the scene, I can assure you it is on par with some of the CGI effects in the film. At one point, I felt like I could see the individual pixels of the shark’s mouth as it chomped. Where’s Spielberg’s Bruce the shark when you need him? Speaking of “Bruce the shark,” even Finding Nemo‘s Bruce the shark would have been more believable as a realistic portrayal of a great white!

The rest of the movie followed a similar pattern of unrealistic scenes that pulled me completely out of the movie. There’s a reason Jaws killed off the woman in the water in a matter of minutes: movie sharks are very good at killing people. The shark in this movie is also very good at killing people; it murders everyone it comes into contact with in a matter of seconds. The only exception is Blake Lively’s character, Nancy, who is more indestructible than Michael Myers and Jason Voorhees combined. Although she tells the audience often that she’s losing blood and energy, she seems to gain superpowers as the film progresses.

I’m not usually the guy to fact check a movie to death and cry for realism at all costs. But I believe that the viewer should suspend disbelief when a story gives a good reason to suspend it. Jaws is a better film because it spent a good 15 minutes showing us the protagonists drinking and singing and talking. The closest we get to characterization in The Shallows is when a bad man, who is obviously a bad man because he sees Nancy is stranded and he steals her phone and supplies, is eaten by the shark… because bad people deserve to be eaten by the shark.

How did this movie earn a 77% score on Rotten Tomatoes!?

Allow me to attempt to explain. Rotten Tomatoes’ system is unique because no matter what a critic says about a film, it all boils down to the website’s specific language of “rotten” or “fresh.” In other words, there’s no such thing as “luke warm” on Rotten Tomatoes. A troubling review can still be counted as “fresh” so long as the author of the review feels that the good outweighs the bad enough to deem a “fresh” rating. So if enough critics are out there thinking, “ehhhh, this was good enough,” a film could earn more “fresh” ratings than it could ever truly deserve. So “77%” doesn’t mean the movie is “77% out of 100%, with 100% being the score of an excellent, flawless hypothetical movie.” On Rotten Tomatoes, “77%” means, “77% of the critics who reviewed this movie found it to be more good than bad.” And that’s exactly what happened in this case. Very few of the reviews for this movie featured on the site were completely glowing. Many of the “fresh” scores point out some major problems with the film. However, something happened in the collective minds of critics on June 24th where this below average shark movie met their threshold for acceptable work.

This is why the Tomatometer should always be taken with a grain of salt. Be sure to dig deeper than Rotten Tomatoes when assessing the quality of the film. One tip for how to get a better idea of the critical quality of the film is to click the “Top Critics” button to see what that aggregate rating is, and how it compares to the general rating. This score is more selective as it tends to include fewer critics who also happen to have a higher threshold for quality. The “Top Critics” score for The Shallows is 67%.