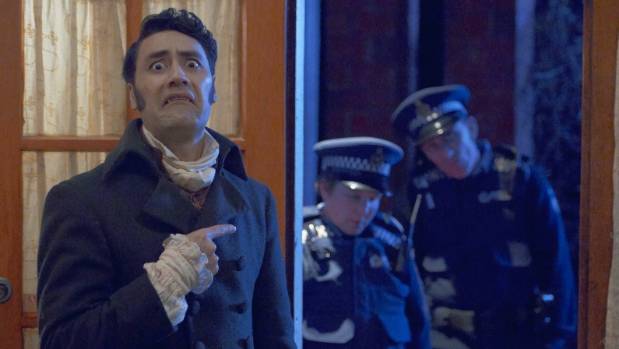 ‘What We Do In Shadows’ Television Spin-off ‘Wellington Paranormal’ to Feature Zombies, Demons, Werewolves, and More

Jemaine Clement and Taika Waititi’s vampire mockumentary What We Do in Shadows will be receiving a television spin-off entitled Wellington Paranormal.

According to Stuff, the series will consist of “six 30-minute episodes … and follow What We Do in the Shadows’ police unit members Mike Minogue and Karen O’Leary, as they hunt out ghosts, werewolves and demonic possessions. They were the cops that were hypnotized to not see the blood or dead bodies in the vampires’ home.”

Producer Paul Yates “…said the series was similar to What We Do In The Shadows, but more documentary style”, a combination of a standard Cops type reality show and the X-Files.

Yates also joked that while Waititi has provided creative input into the script, that”He’s been slightly busy with some hero movie” (Thor Ragnarok).

Waititi has also promised an additional spin-off of Shadows in the form of a follow-up feature called We’re Wolves, which will explore the werewolf characters who interacted with the vampires in the original film.

The series will air in New Zealand in mid-2018 before it makes its way to international markets and the United States.

Stay tuned to Horror News Network for more information on these exciting projects.

‘What We Do in the Shadows’ Episodes 1-3: The Horror News Network Review