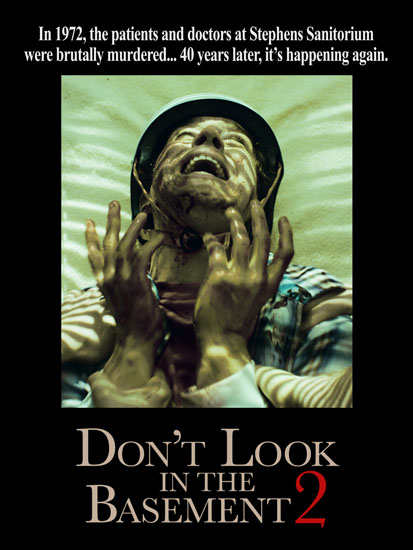 We have the trailer, poster and stills for the upcoming Don’t Look In The Basement 2, which is  written and   directed by Anthony Brownrigg, the son of original director S.F. Brownrigg. You can view the complete press release below.

Dallas, TX –  May 4, 2016 – In his feature film Don’t Look in the Basement 2 director and co-screenwriter Anthony Brownrigg continues the story line of the original 1973 ‘Basement’  film directed by his late father S.F. Brownrigg and released as The Forgotten.  This 2015 sequel which Brownrigg tags a “supernatural thriller” is set forty years later when the only known survivor of a mass murder returns to the institution where the grisly killings took place, his presence triggering a series of increasingly disturbing events.

Don’t Look in the Basement 2  was produced by David Rennke (Source Productions) and Daniel Redd (RDM Productions). The film is scheduled for release on DVD/Blu-Ray May 24th from LeglessCorpse Films and on VOD this Summer.

Brownrigg strengthened the connection of ‘Basement 2’ to his father’s earlier film by casting Camilla Carr in a featured role and revisiting the Trinity Institute (formerly Westminster College) in Tehuacana, Texas, for four weeks of principal filming.

Daniel Redd, David Rennke, Andrew Sensenig, and Brownrigg partnered to create Don’t Look in the Basement 2, LLC under which the film was produced.

Don’t Look In The Basement 2 will be available on a 2 disc special edition Blu-Ray and regular edition DVD. Special Edition Blu-Ray includes feature length on-set documentary shot by Jim O’Rear and the original 1973 film. You can pre-order now at LeglessCorpseFilms.com

Exclusive Clip for Don’t Look In The Basement 2