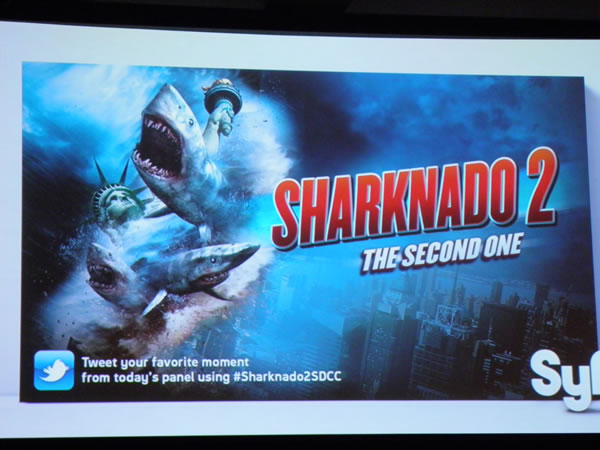 Not “The Sharkening,” not “Sharktastic,” but “Sharknado 2: The Second One!” The Sharknado panel was nothing but a good time with the cast and crew. Sharknado is taking San Diego Comic-Con by storm and the everyone is loving it! Regarding the filming process, Ferrante tells us that both movies were shot in 18 days. With the sequel, it wrapped in February and was delivered in June. At the panel, the trailer was shown and the crowd went nuts. The crowd is behind this film ALL THE WAY! Ferrante says to anyone that questions the reality of this, “cars don’t turn into robots!” Fox tells us to watch for tons of cameos in Sharknado 2 because so many people wanted to be involved. In fact, so many people wanted to be in it that they would write in characters the day before a shoot to include people who wanted to be involved. Sharknado 2 – enough said!

CCI Synopsis: Get your chainsaws ready! A Sharknado is about to hit the Big Apple. Sharknado 2: The Second One stars Ian Ziering (Fin Shepard), Tara Reid (April Wexler), Kari Wuhrer (Ellen Brody), and Judah Friedlander (Bryan) and director Anthony C. Ferrante take you into the eye of the social media and pop culture storm of the century. Get exclusive details on Syfy’s global blockbuster, which will ravage nearly 90 countries, this July. Moderated by Adweek reporter Sam Thielman.