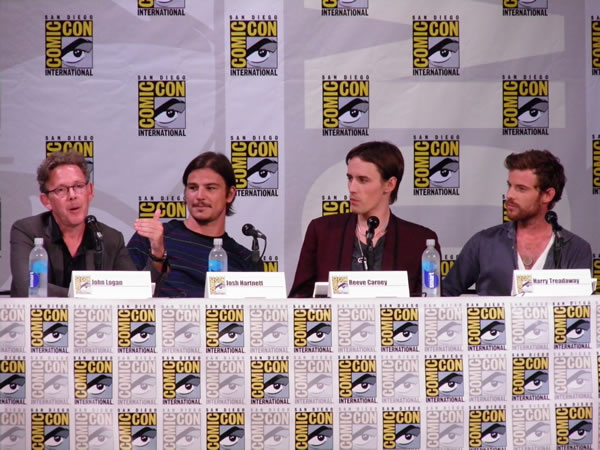 Welcome to Comic-Con, Penny Dreadful! Creator John Logan and several cast members were on hand to discuss the first season. Logan lets us know that the second generation Universal monsters were the inspiration for the project. Hartnett talked about his character and the importance of getting to know the characters before you know if you hate them or like them. Logan told us that he hopes to do the backstory of each of the characters in later seasons the way he did for Vanessa Ives. Teaser: we will learn about Ethan and his father’s relationship in a later season. When asked about the man-on-man sex scene, Carney said he told Logan that he’d better cast a hot guy as Ethan, and that he did. Logan said regarding the killing of Van Helsing that it was creatively  liberating for him and the fans. Logan noted that his Dorian Gray is inspired by David Bowie and Mick Jagger, and also at some point we will see the portrait. When asked about if the shades of “Phantom of the Opera” were intended, Logan noted that it was not, although he loves the book, movies, and musical. The sneak peek and discussion of next season continue to make this a must-watch show for horror fans!

CCI Synopsis: Creator and showrunner John Logan is joined by spellbinding stars Josh Hartnett (Ethan Chandler), Reeve Carney (Dorian Gray), and Harry Treadaway (Victor Frankenstein), as the monstrous new series possesses Ballroom 20. Enter the demimonde to find out what moments haunt the writer and cast from the first season and view a sneak peek to see what the cards reveal about the season ahead. The panel will be moderated by Emmy Award-nominated actress and host Aisha Tyler (Archer, The Talk), followed by a Q&A session with the “Dreadfuls.” Penny Dreadful returns to Showtime in 2015.