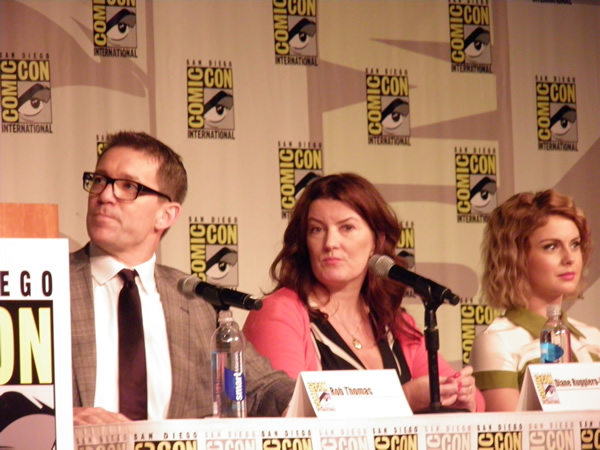 While the pilot was listed to be premeired, there were casting changes and the producers decided to only show a long trailer rather than the full pilot. Regarding changes to the TV show from the comic, to keep up with a weekly series, the creators of the show deviated from the comic to have Liv work in a police morgue to continually have a case to solve. It did look interesting. The crowd did get to see some action where Liv gives chase and “zombies-out.” There is hope here and anyone that enjoys the CW supernatural procedurals, such as “Supernatural,” will want to give is a chance when it debuts.

During the panel conversation, McIver joked that playing a zombie was easy, but it was playing a medical student that’s hard. Kohli enjoyed going through medical books to prepare. Buckley joked that he read his friends’ text and looked in windows as homework for his role. Anders joked that he is always the bad guy, and once again…he is the bad guy.  Goodwin joked that his character is like Shaq meets Cleavon Little from Blazing Saddles. When asked about “Veronica Mars,” Thomas said that the show will be closer to “Buffy the Vampire Slayer” than “Veronica Mars.” When asked about her appearance on the show, McIver used the term “ZILF,” which will undoubtedly be entered into the zombie urban dictionary.

CCI Synopsis: Olivia “Liv” Moore, a 25-year-old medical resident, is on the fast track to a perfect life…until she’s turned into a zombie. Now stuck somewhere between half-alive and undead, Liv loses all traces of her former drive and ambition. She transfers her medical residency to the city morgue in order to reluctantly access the only real form of sustenance left available to her-and the only thing that allows her to maintain her humanity-human brains. But there are side effects to Liv’s new diet: With each brain she consumes, Liv experiences “visions”-flashes of the corpse’s memories-including, in some cases, clues as to how they were killed.iZombie makes its Comic-Con debut with a special viedo presentation, followed by a Q&A with series stars Rose McIver (Once Upon a Time), Malcolm Goodwin (Breakout Kings), Rahul Kohli (newcomer from the UK), and Robert Buckley (One Tree Hill), as well as executive producers Rob Thomas (Veronica Mars) and Diane Ruggiero-Wright (Veronica Mars). From Bonanza Productions Inc. in association with Spondoolie Productions and Warner Bros. Television and based on characters created by Chris Roberson and Michael Allred, published by DC Entertainment’s Vertigo imprint, iZombie premieres Midseason on The CW.