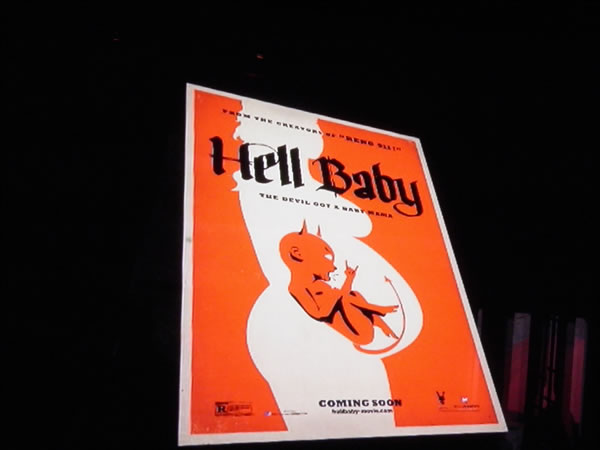 HNN staffers Stephanie Shamblin Gray and Brian Gray were fortunate enough to attend the Hell Baby screening and reception in San Diego during Comic Con weekend. Steph's thoughts and Brian's images from the event are below.

Hell Baby enters the world as a horror-comedy with a great cast and a ton of potential. While the blood flows freely, the nudity and sexual references play an even bigger role in this movie. If you are offended by sexy naked women or not-so-sexy old naked women, you'll want to avert your eyes. While I had anticipated outright hilarity based on the people involved in the project (these are the creators of "Reno 911", after all), it would be more appropriate to describe Hell Baby as an enjoyably funny horror movie. I suspect this film will pick up a bit of a cult following, and anticipate seeing chain-smoking priest cosplayers at the next convention. Overall, fans of horror comedies will definitely want to check this out, but Hell Baby may not be the film to convert fans of comedies to horror. The film will be available in select cities and on Premium Video On Demand on September 6.