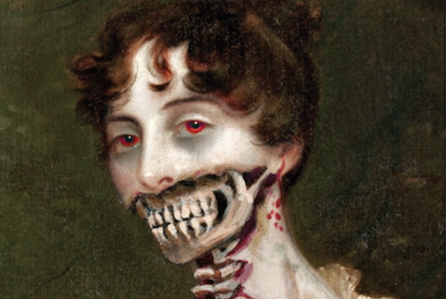 Screen Gems will debut footage for from it’s upcoming ‘Pride & Prejudice & Zombies’ and ‘Patient Zero’ at Comic-Con.  On July 11 their panel will include P&P&Z director Burr Steers and author of the book Seth Grahame-Smith, along with the cast including   Lily James, Sam Riley, Bella Heathcote, Douglas Booth, Jack Huston and Matt Smith.  Smith, who also, stars in Patient Zero, will be presenting footage from the film, alongside co-star Natalie Dormer, director Stefan Ruzowitzky and screenwriter Mike Le.

‘Pride & Prejudice & Zombies’ is a new take on the zombie genre with the well known women from English literature. It follows a zombie apocalypse that has been going on for 70 years and the Bennet sisters who have had enough of it.   Lily James stars as Elizabeth Bennet, Sam Riley as Mr. Darcy, Bella Heathcote as Elizabeth’s sister and Matt Smith as Mr. Collins.   ‘Patient Zero’ is centered around a global pandemic that creates a new violence driven species.   One human survior, who has the ability to communicate them, leads a hunt for Patient Zero to try to save his infected wife and find a cure.

Comic-Con runs at the San Diego Convention Center from July 9-12.