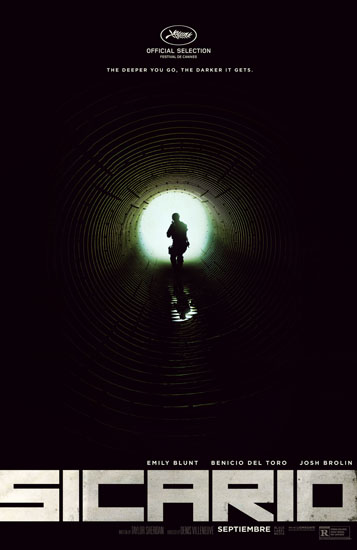 Experience an intense, exclusive look at the highly-anticipated new action-thriller, SICARIO, by downloading the TEASER POSTER and first look IMAGES below. Set to debut at the Cannes Film Festival THIS MONTH, SICARIO follows FBI agent Kate [Emily Blunt] and her conflicting journey that descends into the intrigue, corruption and moral mayhem of the borderland drug wars. This powerful film was directed by the notable Denis Villeneuve [Prisoners, Incendies] and features a kick-ass cast including, Academy Award® winner Benicio del Toro, Golden Globe Award® winner Emily Blunt, Academy Award® nominee Josh Brolin along with Jon Bernthal, and Emmy Award® nominee Victor Garber. Check out the new teaser poster and images below, and gear up for SEPTEMBER 18, 2015 when SICARIO begins releasing in select theaters, then nationwide SEPTEMBER 25, 2015.

In the lawless border area stretching between the U.S. and Mexico, an idealistic FBI agent [Emily Blunt] is enlisted by an elite government task force official [Josh Brolin] to aid in the escalating war against drugs.

Led by an enigmatic consultant with a questionable past [Benicio Del Toro], the team sets out on a clandestine journey forcing Kate to question everything that she believes in order to survive.