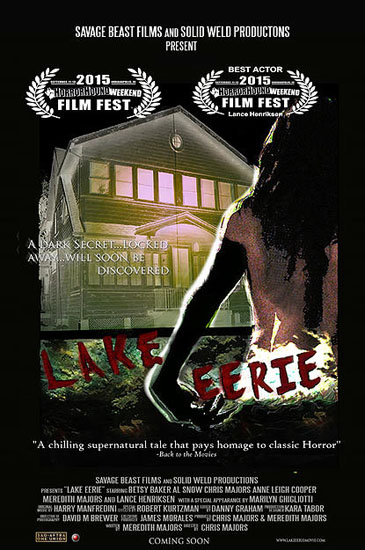 The independent feature, “Lake Eerie,” focuses on a young widow, who moves into an old house to recover from the sudden loss of her husband. Little does she know that a dark secret, locked away inside her new home on Lake Erie will soon to be unleashed.

“Lake Eerie” had its World Premiere at the HorrorHound Film Festival in Indianapolis, Indiana in September of 2015. After its debut the audience rose to their feet with a rousing standing ovation. This resulted nominations for Best Feature, Best Actress (Betsy Baker), Best Actor (Lance Henriksen) and Best SFX (Robert Kurtzman), scoring a Best Actor win for Henriksen.

The musical score was composed by the masterful Harry Manfredini, who is well known for the “Friday the 13” series and “Wishmaster.” The theme song, “Le Reverie” (“The Dream”), is written and performed by the heavy metal goth quartet Le Reverie, fronted by Allie Jorgen.

Meredith Major adds, “I am truly humbled by all of the incredible artists who came together to make “Lake Eerie” come to fruition. To have my first screenplay be produced and now have distribution is such an honor, and I am very grateful for this amazing experience.”

Gravitas Ventures’ Film Acquisition Coordinator Michael Lange continues, “Lake Eerie” offers fans of the horror genre a new twist on the supernatural, and we couldn’t be more delighted to bring the Majors’ vision to 100 million + homes in North America.”

“Lake Eerie” was shot in the fall of 2013 in La Salle, Michigan. During the twenty one days of principal photography the film crew came to realize that the house was actually haunted. They hired three teams of ghost hunters who captured proof. The behind the scenes footage and additional paranormal activity will soon be seen on the second season of “Paranormal Survivor,” that airs on the Destination America cable channel.

In addition to the upcoming Video on Demand release, plans are underway for a limited theatrical release, as well as screenings at more film festivals.

“Lake Eerie” has been described as a cross between “Rosemary’s Baby” meets “The Shining. Back to the Movies cited it as, “A chilling supernatural tale that pays homage to classic horror,” with LA Metal Media stating it is a…”Truly unique and terrifying film.”

For more information on “Lake Eerie,” the movie, please log on to www.lakeeeriemovie.com.