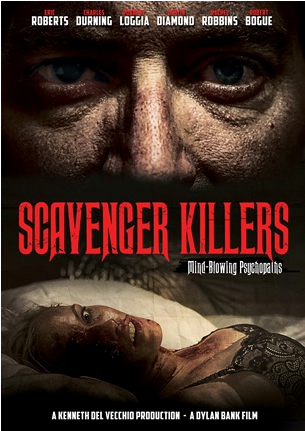 Everyone’s heard of the “long arm of the law.” What if there was a homicidal maniac attached to it? Midnight Releasing announces the July 1st DVD, VOD and Digital Download release of SCAVENGER KILLERS, a blood and guts contemporary tale of justice gone very, very wrong.  SCAVENGER KILLERS will be available across the US & Canada on a variety of platforms, for the ultimate convenience in viewing. DVD availability is set to include Walmart, Target, Redbox, and more.  On the digital side, the film will be available on all major and minor cable VOD channels as well as major internet platforms including iTunes, Amazon Instant, Vudu, Google Play, Xbox Video, Sony Entertainment Network, and others. SRP for the DVD is $24.98, with DVD pre-book on 5/20/2014.

A no-holds-barred, wickedly modern spin on the Bonnie and Clyde legend, SCAVENGER KILLERS features a stellar line-up of classic character and veteran genre actors including Eric Roberts (“In Cold Blood,” The Dark Knight), Charles Durning (The Sting, North Dallas Forty) and Robert Loggia (Scarface, Independence Day) along with a quirky appearance by Dustin Diamond (“Saved by the Bell”), among others.  Directed by Dylan Blank and co-written by Kenneth Del Vecchio and Rachael Robbins, SCAVENGER KILLERS goes over the top with the voluptuous contributions of scream queens and Playboy models Rachael Robbins, Suzi Lorraine and Angela Little.

Starring Robert Bogue (“The Following”) as charismatic and respected Judge Taylor Limone, and co-starring Rachael Robbins (Bikini Bloodbath Christmas) as sultry, scheming attorney Clara Lovering, SCAVENGER KILLERS graphically portrays what can happen when the pressures of bringing the most heinous criminals to justice ferments into a darkly psychological and sexual pursuit of perverse pleasure.  The sensual becomes seethingly sinister when these two citizens see to it that justice is served their way!