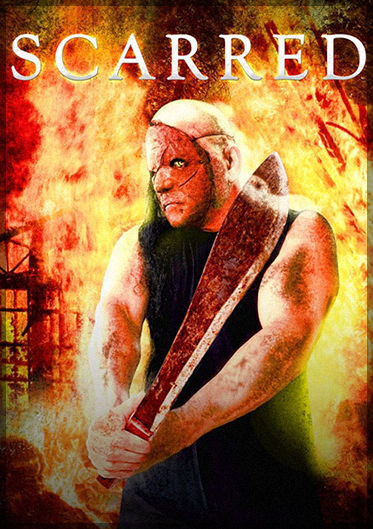 ‘Scarred’ has been released on DVD and VOD today. It is available on iTunes, Amazon, Google Play and XBOX.

You can buy it on the official website here   and watch   the trailer below.

Cringe and scream as you watch the latest horror film from Fright Teck Pictures!

Unique in that the film has both experienced actors and newcomers which include:

Ari Lehman (the original Jason Voorhees from Friday the 13th)

and some wonderful local talent.

Shooting much of the film in Medina County, Ohio, the film will keep you on the edge of your seat as you watch some great performances from our cast!

in modern day, with the owner of a modeling agency, Faye Ambler (played by

Justine Greenwald) has been propositioned by a wealthy upper echelon, George

Sanders, whose son is a nature photographer and is looking for his dad to give him

a break in the fashion world.

Faye sends four of her girls to Wolf Ledges for the shoot, since it is known for its

quiet and rural nature. Faye feels this remote resort would be perfect for a newbie

nature photographer to practice his new craft. As the story unfolds, the models,

their chaperone “Bo” (who happens to be Faye’s nephew), and Brodie the

photographer, have a run-in with a couple of townies and are ultimately warned of

the Kandies. Needless to say the group is not buying it and they go along with a

blatant disregard to the warning, finally succumbing to their fate one by one as

expected by the wrath of no other than Jonah Kandie.

Neeld along with Janine Bowles Sarnowski, Carl Ferrara, Don Kilrain and an

written and directed by Eddie Lengyel.