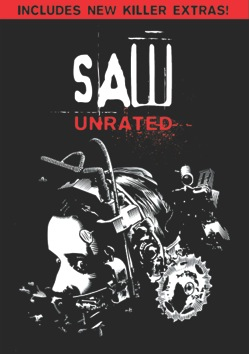 You Think It’s Over, But the Games Have Just Begun

Include New Killer Extras Featuring the Cast and Creators

The film that redefined the horror genre, Saw: Unrated, is making audiences shriek all over again. Generations of movie fans have been thrilled and terrified by Saw’s blood-curdling story of a serial killer who traps his victims in a sadistic game of survival. For true horror fans who want a peek behind the scenes of the creation and development of the most successful horror franchise in history, the iTunes digital release of Saw: Unrated and Saw: The Complete Collection now includes a brand-new 3-part, 77-minute retrospective, Game Changer: The Legacy of Saw.

Game Changer: The Legacy of Saw digs into the guts of the successful franchise with all-new interviews with creators James Wan (director of Furious 7) and Leigh Whannell (writer of the Insidious franchise); plus original cast members Tobin Bell, Shawnee Smith and Cary Elwes; and producers of the Saw franchise, Mark Burg and Oren Koules. Learn about the inspiration for the film from the creators of Saw; get a closer look at the infamous reverse bear trap mask with Shawnee Smith; hear from directors Darren Lynn Bousman (Saw II, Saw III, Saw IV), David Hackl (Saw V) and Kevin Greutert (Saw IV, Saw 3D: The Final Chapter); and see Eli Roth’s (Hostel) take on the “torture porn” genre. In the famous words of Jigsaw, it is time to “make your choice.” Watch or don’t watch. Choose wisely.