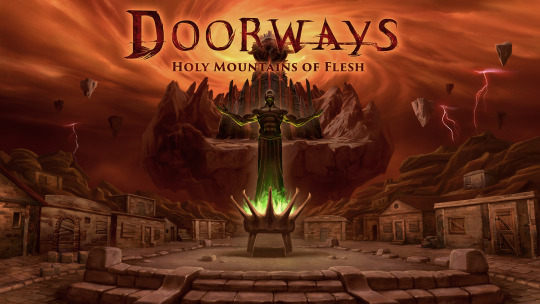 Doorways continues in ‘Holy Mountains of Flesh’, the fourth episode in the series, which puts players in the shoes of Thomas Foster, a special investigator who will face a new criminal case: he must capture an entire family of lunatics led by Juan Torres, better-known as “El Asador”. Juan and his family are the focus of numerous rumours surrounding El Chacal, a small town located in the mountainous area of Salta, Argentina.

Prepare to face a different breed of killer!

This fourth episode will force the player to face even more sinister terrors than those experienced in the three previous episodes. Rumours about ‘El Asador’ point to many urban legends involving cannibalism, black magic, sects and all kinds of superstitions. Be ready to enter the most twisted of criminal minds!

‘Holy Mountains of Flesh’ features gameplay mechanics in the vein of the first three episodes – first-person horror exploration and puzzles. The Story takes the player along claustrophobic and gloomy scenarios, which also include rewards and secrets to any player who dares to explore them.

Featuring the voice of Sam A. Mowry (Alexander in Amnesia the Dark Descent) as Thomas Foster, the new episode is being developed in Unity 5 to make use of PBR technology (physically-based rendering) which allows the creation of realistic and detailed environments.

The development team is more committed than ever to make Doorways Holy Mountains of Flesh the best episode to date.

Doorways: Holy Mountains of Flesh will arrive on PC (Windows, Mac & Linux) during second half of 2015.