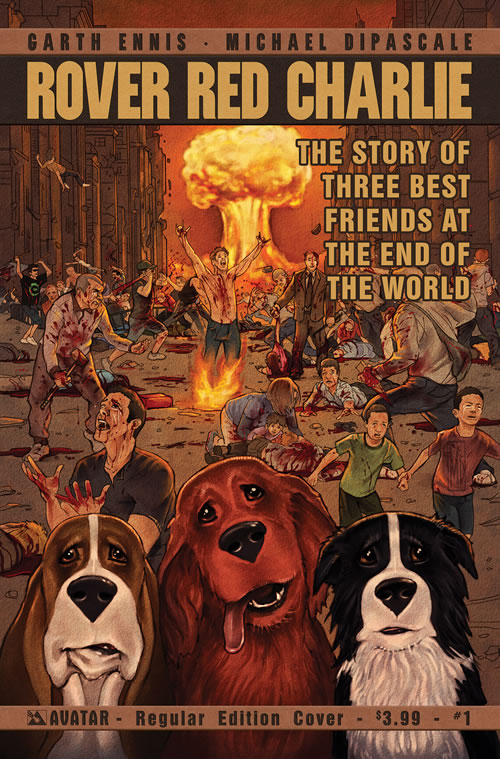 Synopsis: When a worldwide epidemic suddenly rids the Earth of all humans, what happens to man’s best friend? GARTH ENNIS – the master wordsmith of Preacher and Crossed – delivers a story like no other, as a band of canines set out to survive on their own for the first time. This is the story of three best friends at the end of the World. Charlie was a helper dog and he was good at getting his feeders safely around. Now he and his pals Rover and Red must escape the failing New York City and find their way in this new order. Ennis applies his incredible talent for creating rich and complex characters to a whole new species, with this shockingly original tale that is fully painted by Michael Dipascale.

Our Thoughts: As comic fans know, nothing is sacred in the Avatar world of comics. Rover Red Charlie is a comic brought to us by the twisted mind of Garth Ennis.

The comic shows a Crossed-like catastrophe taking place in NYC. What makes this different than crossed is that we see this world through the eyes of three dogs.  As the world begins to crumble around them, the four legged trio come together and trying to make sense of and survive.

What makes this book stand out to me is that we can’t see dialogue from the humans (brilliantly referred to as “feeders” ) because dogs speak and understand in dog….not human language. So we are stuck trying to piece together what has caused the humans to go crazy.

The first issue was nothing short of fantastic and I look forward to the rest of this series.