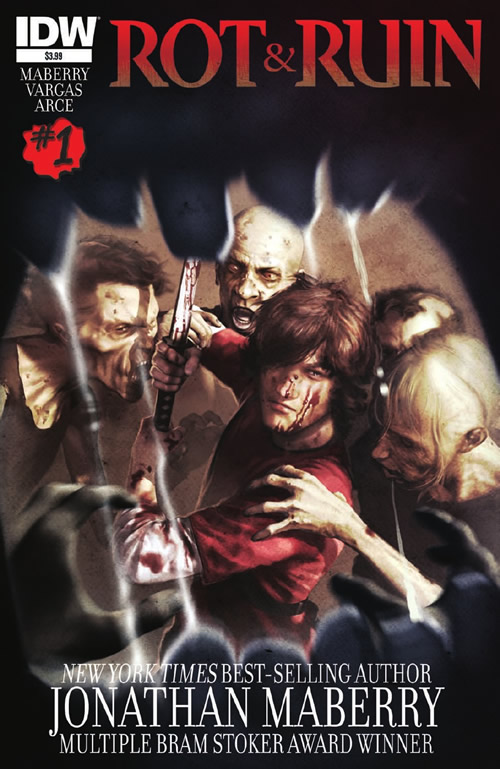 Synopsis: Brand new adventures set in the world of Rot & Ruin! Written by NY Times best-selling author and multiple Bram Stoker award-winner, Jonathan Maberry, this all-new storyline continues events from the award-winning series of novels. In Rot & Ruin: Warrior Smart we meet Benny, Nix, Lilah and Chong as they travel through the Sierra Nevada mountains just one faltering step ahead of zombie hordes and one giant leap behind the plane flying through the sky that set them on their journey of discovery.

Our Thoughts:  Some things in life are just unavoidable; taxes, death and the production of Zombie Apocalypse themed comic books.  It is such a red hot genre, like it was with slasher movies in the 80’s, when quantity guaranteed profit, quality was almost unnecessary (even though terrible 80’s slasher movies are a well-known guilty pleasure of mine).  I get irritated when people exploit a sub-genre to try and draw out the same success that something truly unique and original had already defined or reinvented.  So is Rot and Ruin #1: Warrior Smart just another exploitation of the zombie apocalypse to bring in dollars from the huge Walking Dead demographic?  Fortunately, I am pleased to say, no it is not.

Rot and Ruin #1: Warrior Smart has all the key elements that make Zombie Survival stories so captivating with enough tweaks and twists to keep it fresh.  Rot and Ruin #1 takes place in the same world as its best-selling novel predecessors and is written by the same Bram Stoker award-winning author Jonathan Maberry.  Established fans of the books will feel creepy-cozy and at home in issue one of Rot and Ruin: Warrior Smart, I’m just not sure people new to Maberry’s characters and world will have the same immediate connection.  People up to speed with the novels have a prior relationship with the characters in Rot and Ruin #1 but the speedy introductions presented might not be enough to snare the minds of newcomers.  None the less, I feel the story is captivating enough to capture fans of survival horror and overall Rot and Ruin #1; Warrior Smart is very well written.

The cover art done by Alex Ronald and Ryan Brown is superbly sinister and does well to make Rot and Ruin #1 stand out on a shelf occupied with horror comic company that are vastly below average. Tony Vargas’s illustrations within the issue are excellent and truly display his talent.  I just feel the character design is a little too cartoony and comes off more upbeat than I think Maberry’s story is meant to.  Not to take anything away from Vargas’s work, I just think a little more realism and grit might have gelded a little better with the Rot & Ruin world.

Altogether, Rot and Ruin #1: Warrior Smart was enjoyable comic that will definitely standout from the many zombie horror books that are out there.  Established fans of Maberry’s novels will especially enjoy this graphical spinoff and I definitely feel Rot and Ruin #1 is worthy of a few of your survival horror dollars. Go check it out, it’s in stores now.