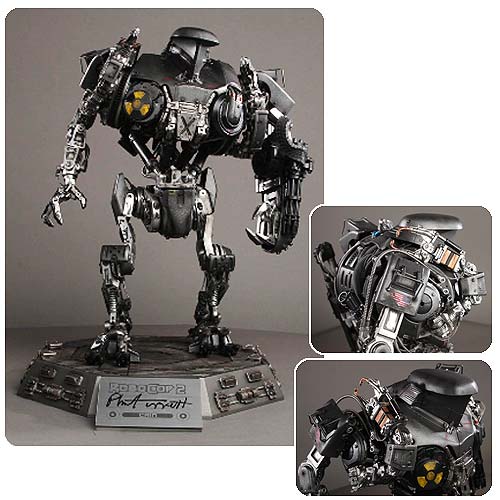 From the 1990 RoboCop 2 film comes this highly detailed Cain Statue! This exquisite resin, plastic, and die-cast metal replica absolutely spares no details, from the robotic structure, the individual rivets of its construction, chains, gears, to the hydraulic pumps! Cain measures 16-inches all x 10 1/2-inches wide x 6-inches long and stands atop a logo base with display plaque signed by Phil Tippett. Limited edition of only 500 pieces worldwide.

The 1990 film RoboCop 2 introduced the world to one of science-fiction film’s most menacing characters, the Cain cyborg. With a power-hungry psychopathic drug-lord as its human base, and an unscrupulous business as its creator, Cain wreaks havoc on the innocent civilians of Detroit until taken down by RoboCop in a climatic final scene.

Co-created by legendary special-effects animator Phil Tippett, the charismatic Cain was brought to life in the film with a full-size robot prop and several intricately machined stop-motion puppets, all which have survived and live at Tippett Studio.