It looks like Freddy Krueger is ready to invade the Upside Down, or at least the mental hospital in Hawkins, IN.  According to a post on the official Stranger Things Facebook page on Friday morning, Robert Englund is among a troop of eight new cast members set to join the Netflix series for their upcoming fourth season.  Eleven and crew could have their hands full with more than just the Demogorgon in 1986.

Mr. Englund is in very good company as fellow newcomers include Game of Thrones alum Tom Wlaschiha, who plays Russian prison guard Dmitri.  This is significant as it confirms that fan favorite Hopper (David Harbour) did in fact survive the final of events of season 3 and is being held against his will by the Soviets.  But the real good news for horror fans is that Englund, the man who became a pop culture phenomenon in the ’80s and ’90s for his unparalleled depiction of nightmare slasher Freddy Krueger in the Nightmare on Elm Street movies and spinoff projects, will be taking on his first significant acting role in well over a decade.  He will play Victor Creel, a “disturbed and intimidating man who is imprisoned in a psychiatric hospital.”  Now that is a role that this horror legend can sink his knives, uh teeth into.

Stranger Things has been a monster hit for Netflix ever since debuting back on July 15, 2016.  Its engaging and conspiratorial monster story has given rise to countless toys, posters, shirts and just about anything else that the streaming service could market to the masses.  The uber-nostalgic element of the 1980s setting also plays heavily into the show’s lore and popularity.  The series has resurrected the careers of Wynona Ryder and Sean Astin (to an extent), while showcasing the rising talents of Finn Wolfhard, Millie Bobby Brown and Gaten Matarazzo among many others.  Let’s hope the same can be said for terror icon Englund, who has been rumored for years to don the red sweater and razor glove for various Nightmare projects but has yet to do so in a substantial way.

Keep tuned to HNN for more news on Stranger Things season 4 (including a possible release date) as it breaks! 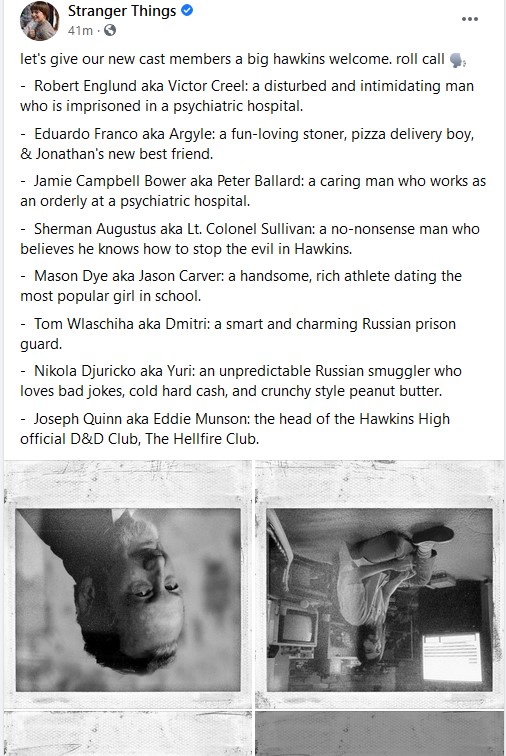