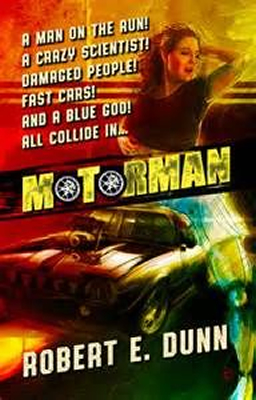 The love of the car culture, movie monsters, music, long drives to the middle of nowhere, a beautiful woman or… women all are connected to different parts of our lives. For author Robert E. Dunn, his latest book on the “Necro Publishing” house brings all these elements together in a trippy, dangerous, and dream like purgatory that one man named Johnny Burris must motor through facing his destiny as attraction sits heavy in the air, the blue lights shine above and monsters are the norm within this lost town. Robert took some time out to talk about one of his latest works and the impact being an army brat had on him, fast cars as well as music in writing.

Jay Kay: Talk about where the idea for “Motorman” came from? How impacted were you by the car culture that seems to be weaved through this dream like tale of purgatory?

Robert E. Dunn: Car culture was one of those central themes rattling around my brain the entire time I was writing Motorman. My car culture is not so much the modern one either. Mine was often spelled Kar Kulture and featured things like Rat Fink monsters, duces, gassers, people named Big Daddy, Tiki gods to bless the rods, and bands called things like Commander Cody and the Lost Planet Airmen. Cars were American and America at the same time. They fused with the “Duck and Cover” paranoia of the age to produce a joyous, death machine, environment that expressed itself in speed and gold metallic flake paint. Yeah I guess you could say I was impacted. Did it show in the book?

Jay Kay: “Motorman” revolves around the main character Johnny Burris who flees a murder at his place of work and home in a junkyard. Talk about why this was the ignition for the story to propel it forward and send Johnny in the direction of the Ozark Mountains?

Robert E. Dunn: Johnny was a man without a home and we get little glimpses of his life. Just tiny sparks of loss and distance from family buy there is no real explanation of why he’s living in a junkyard. It is on purpose. I hope the reader sees him a little bit like a “Man With No Name” in a Sergio Leone picture. His story begins there and the junkyard serves as a holding place for his life before he runs, to make the fact that he ends up tied to another junkyard and that his second life is built from the pieces of that yard show inevitability. He is a man with choices but never exercises them, consequently he is doomed to become the machines he is so closely tied to.

Jay Kay: “Motorman” is a twisted love story on many levels. You have the love triangle between Emma, Bella and Johnny. You have a love connection with machinery, with music, with helping people in a real twisted way among others. Talk about these love connections and how horror ties into them?

Robert E. Dunn: Love is an active thing. The reason it ends as, more than a triangle, some weird polygon, for Johnny is that he lets it all happen without choice. He never stands and says, “This is who I am.” Or “This is what I demand of life.” He is capable of desire, not love but he does not know the difference. Neither do the machines or the machineries of the bit of nowhere he finds himself in.

Jay Kay: We see a wide variety of influences on your writing. More than just films and literature we see the car culture and music. What did you draw from to construct the tale and give the town in the Ozarks its classic feel?

Robert E. Dunn: I grew up in the Ozarks. And I grew up with so much music and cars, a lot of old movies on an old TV my father got from a dump and rebuilt for me. I took all of it and shoehorned it into a story that echoed, post war America from the day the music died to the August night in 1977 when I saw Elvis in his next to last concert. When you ask what I drew from I have to admit the list is so long I could not begin to lay it out. But, if I had to choose a word to speak to everything it would be design. The eighties were the beginning of the end for big design. There was no more chrome or fins, no hood ornaments and rock rattled its way through disco to synth, even the movies became smoother and more real. The design of the world grew in sophistication but lost the charm of extravagance. Streamlining is, by its nature, a process of loss. We lost so much.

Jay Kay: Did your upbringing as an army brat affect Johnny’s personality and motivations?

Robert E. Dunn: I think so. Johnny is a man longing for place at the same time never feeling like he could fit in, never making the adaptations necessary to thrive in the world. That is the Army world in civilian life and it is a theme, any young person met with change must face. To fit you must compromise, but when you are not yet sure of who you are, how far can you go before you give up too much? 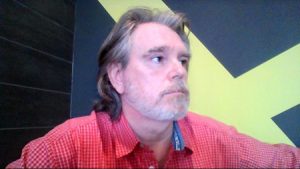 Jay Kay: One of the biggest inspirations I see reflecting “Motorman” is “Frankenstein” and the aspect of rebuilding the town folk with in the doctor’s disturbed image. Talk about creating a character like the Doctor and how you ended up with the town looking like a mix between the tin man, “Meatball Machine”, the “Island of Dr. Moreau” and the 50’s rockabilly culture? Would you consider this book body horror?

Robert E. Dunn: To take the last bit first–I don’t think of Motorman as body horror. That’s because for me, for this story, the body is not sacred. In order to elicit body horror I think the characters need to feel repelled by their modifications. That is not to say that the reader may feel horrified by some of the hybridization that takes place. My feeling is that you hit the sweet spot by bringing up Frankenstein and Dr. Moreau. This is soul horror. This is a story of people that acquiesce, even participate, in giving up their humanity to be machine. Modern, even topical corollary, Pokemon Go. People melding to a device, a game that sends them on tasks to capture free roaming creatures—who could write this stuff? And the Doctor is a classic mad scientist character with a little blue goo monkey on his back. I wanted a character that was out of Central Casting for him but I needed him to smile with grandpa’s dentures while he stole your soul. He was a fun one.

Jay Kay: Did you write this story to a soundtrack? How important was music in the development of this?

Robert E. Dunn: Music goes all through this story and mostly it is from the 1970’s. Meat Loaf-Bat Out of Hell, that operatic, angst riddled, scream of fear and release album was a center piece to the playlist. Songs from the era are sprinkled throughout the story as little touchstones, talismans of sound that orient you to the place but I hope, never dead on. They are intended to be perfect but not absolutely perfect. It is why they are so clustered in the ‘70’s when the ‘50’s and ‘60’s K-Tell hits album might have gone so well.

Jay Kay: Talk about the relationship of sex and pain within “Motorman”?

Robert E. Dunn: The sex is more longing and the pain is more loss. More but nothing is absolute here either. The damaged people are the beautiful ones in this place. The damage, even when not on screen, is certainly shown as violent. In that place you have to lose yourself, with agony to become desirable. Sex here is a surrender to pain and a wallowing in the metal parts that can’t feel. But they can can’t they? It is not Clive Barker and the bondage damned but much more Mary Shelly’s Prometheus in Motorman. You pay your price and you get your chrome. Do you want chrome? Yes,you do. The price of becoming something more is becoming something more and still remembering who you were.

Jay Kay: In the end, Johnny becomes what he is most connected with… machinery? Was the ultimate and tragic end game of this story?

Robert E. Dunn: The ending was always my goal for this story. It is a bit tragic but these people could go no other way. Unless there is a sequel. Something with an El Camino perhaps.

Jay Kay: What is next for you and where can the readers find out more?

Robert E. Dunn: 2016 has been and continues to be an amazing year. After Motorman I’m releasing a very normal mystery/suspense called A Living Grave. It features a female sheriff’s detective in the Ozarks, noticing a theme here, who gets involved with modern bootleggers, murder, bikers, gangsters, and a “Slenderman” style character who may or may not be real. Perhaps it is not so normal after all. Add to that The Harrowing coming in Nov. Think, if you can, of Richard Kadrey and Jim Butcher getting so drunk they produce a love child neither one will claim. The Harrowing is about a mercenary biker who is recruited by an arch angel to rescue an innocent from hell. Of course, no one in hell is innocent and the first thing you learn there is, never trust an angel. 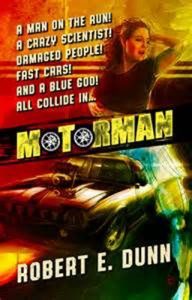 Jay Kay is a Horror News Network Contributor and Host of the HorrorHappens RadioShow.  You can follow Jay Kay @HorrorHappensFF