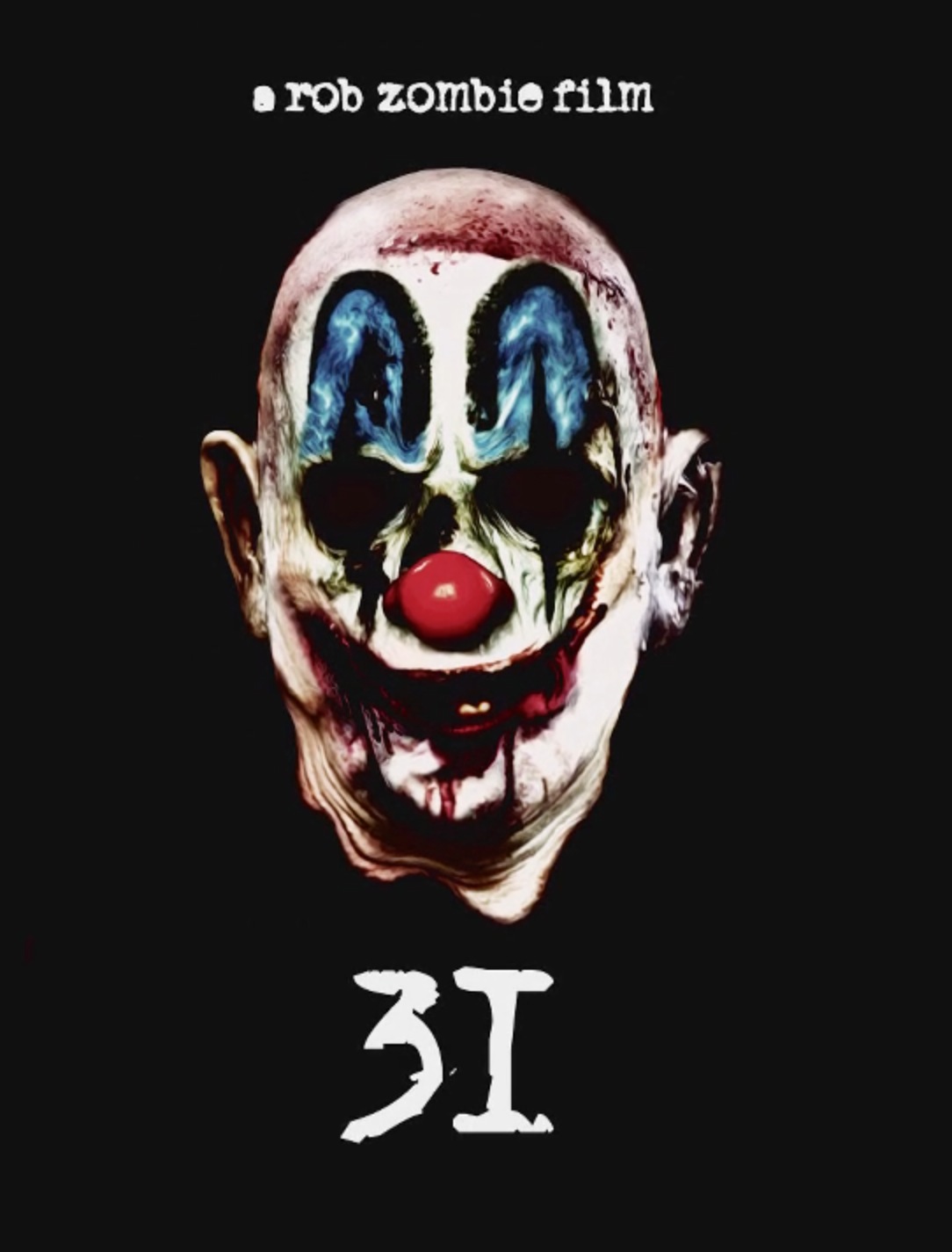 In the Q and A following the Fathom Events screening of Rob Zombie’s latest horror film 31, he revealed that the genesis of the story sprang from his frustration in trying to get his hockey film Broadstreet Bullies off the ground.  He recalled a phone conversation where he told the person on the other end of the receiver that he could “make up a movie in five seconds” that would be easier to make than the one he was currently working on.   It would be the “dumbest thing” and “easy to sell”.  Unfortunately, Zombie’s analysis couldn’t be more true; 31 is a half-baked, rushed production that is both cheap and “dumb”.

Zombie has always had his fans (who mainly followed him from the concert hall to the cinema) as well as his detractors.  Most horror fans do not sit on the fence when it comes to Rob Zombie’s films; you either love them or hate them.  Fans love the frenetic pacing, music video style editing, and colorful cast of forgotten stars and misfits from some of their favorite films of the past.  Naysayers accuse him of “borrowing” heavily from the horror masters of the 70’s such as Craven, Carpenter, and Hooper and yet never truly understanding how to employ their techniques to tell a scary, original story.  If you are not a fan, you need to stay away from this film at all costs.  If you are a fan, you may leave the theater feeling “exploited” like the thread-bare characters in this film.

Zombie readily admits that the concept of the film is taken directly from Richard Connell’s 1924 short story “The Most Dangerous Game”. Numerous writers and film makers have given us their versions of this basic story line, most notably, Stephen King’s “Running Man”, John Woo’s Hard Target, and the Hunger Games series.  Every generation gets their version of this story.  It is an easy “paint-by-numbers” pattern used to build suspense, drama, and action, but Zombie throws a bucket of paint at the screen with this attempt and elicits none of these qualities from the audience.

First of all, you have to care about the characters in a story like this for it work.  These characters, both the heroes and villains, are cheaper copies of copies from Zombie’s previous films.  I wish the film started with a carnival barker shouting the following: “Did you love Bill Mosley as Otis in House of 1000 Corpses and Devil’s Rejects?   Now try Richard Brake (who incidentally looks like a cross between Mosley and the late lead singer of the Cramps Lux Interior)!  Did you like Ken Foree in Lords of Salem and Halloween? How about a two-for-one special with Lawrence Hilton-Jacobs and Kevin Jackson! And if you love Rob Zombie, how about a look-alike stand-in in the form of Jeff Daniel Phillips!” The fact that the roles were recast with younger, cheaper versions of Zombie’s normal acting troupe is obvious throughout the film.

Horror films are not generally known for extended character development, but 31 sets a new standard for rushed characterization. Usually we can relate to the standard character archetypes that have been the subject of self-referential films like Scream and Cabin in the Woods.  None of the characters in 31 are given any time to develop and none of them are likable.  There is no one to root for here; even “final girl” Charly (played by Sherri Moon Zombie) is unable to elicit any sympathy or connection from the audience.  Moon Zombie goes through so many immediate changes that the character seems like five different characters rolled into one.  One second she is cowering in fear, the next second she is behaving like Linda Hamilton in Terminator 2 as she confidently goes on the offensive against her clown captors, and the next second she is lamenting their plight and thinking about the “good ole’ days.”

Like Moon, Brake’s performance as “Doom-Head” also comes across as wildly inconsistent.  Is he supposed to be a dirty, mysogonistic backwoods killer or a pontificating “dandy” who spouts philosophical assertions about life, death, and sin?  Again, this amalgam of two character types does not work and Zombie’s attempt to “class up” (as he does at the start of the film with a quote from existential author Franz Kafka) the character with ham-fisted dialogue that in retrospect seems more appropriate for Malcolm McDowell’s underdeveloped and unexplained Father Murder.

In terms of creating suspense and terror, Zombie fails to establish any sense of menace, largely due to a horrible editing and questionable cinematography.  There are are many battle scenes in the film as the captors face off against an array of grease-painted maniacs.  When these battles occur in a film, they are supposed to elicit concern and excitement from the audience.  It is impossible to follow the flow of action in these scenes and I was never sure who was injured, screaming, or winning.  This is not due to the rapid movement of the camera; this is due to not knowing what to show the audience to create suspense. This goes beyond a poor stylistic choice (such as using the freeze frame Texas Chainsaw shot a distracting number of times in the film) and is instead an exercise in amateur film making.

Zombie thinks he “made the movie people wanted me to make”, however there is a difference between fan-service and pandering.  Zombie showed a slight degree of promise in his previous film Lords of Salem.  It was different than his other films, it contained some interesting, disturbing visuals, and it showed a director who was attempting to branch out and apply his skills in somewhat of a different way.  31 is a major step back for Zombie. Throughout the entire course of the film, I never felt shocked, scared, or invested.  I felt the worse thing you can feel in a theater watching a horror movie: bored.

Bummer, couldn’t make the screening Thursday because I was actually seeing Zombie in concert. I was looking forward to this one. Still going to order it on demand but I’ll expect much less now.