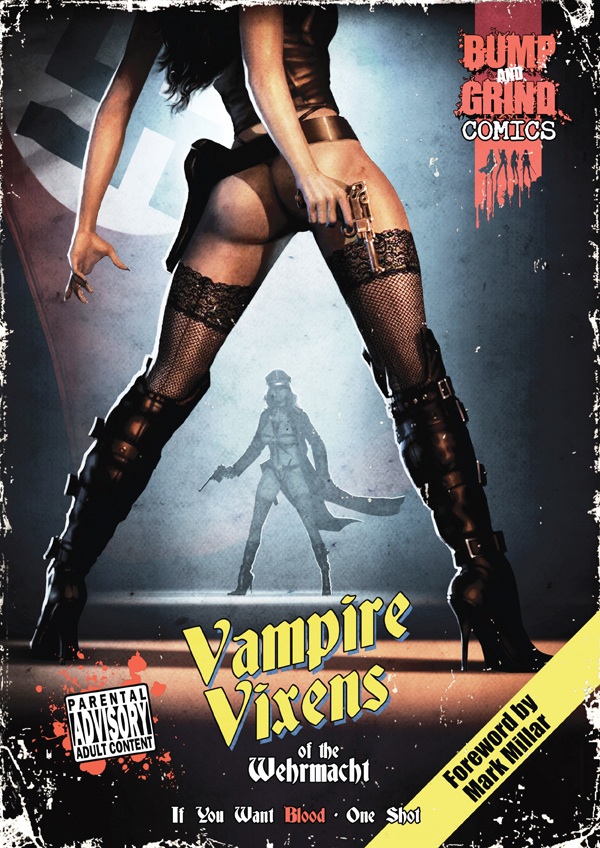 Review: Vampire Vixens of the Wehrmacht – If You Want Blood

Review: Vampire Vixens of the Wehrmacht – If You Want Blood

Title: Vampire Vixens of the Wehrmacht – If You Want Blood (One-Shot)

Synopsis: Vampire Vixens of the Wehrmacht is an all action horror comic riddled with bullets and drenched in  blood but with it’s tongue planted firmly in it’s cheek.

It’s the early stages of WW2 and the SS Occult division have unearthed a coven of Vampire women entombed within a subterranean church in north Africa.

Have the Nazis discovered the ultimate super soldier? Sexy, ruthless, deadly and immortal, could these vampires be the ‘Guardians of Ultima Thule’ the  legendary keepers of the Aryan bloodline? Before the Nazis can put their undead secret weapons to use, British agents from MI6 kidnap one of these women back to England.  With the help of mystic Aleister Crowley they turn this hell spawn woman to fight for King and Country.

Our Thoughts: Vampire Vixens of the Wehrmacht is a perfect example of why I write reviews for comics. Being a British comic, and me being in the U.S., I would have never come across this on my own and I instantly fell in love with the images that I saw on the press release. The love affair continued when I received my review copy. Vampire Vixens is completely over-the-top and absolutely bragging about it.

The writers present a story they know is ridiculous and they revel in it. What else would you expect with Nazis, after all?  There are winks and nods to the reader throughout the story. Vampire Vixens even offers a storyline directly around the reason why Hitler only had one testicle. Oh, and Aleister Crowley is also used as a character, of course. What more could you want? Well, that brings us to the art….

The art is sexy, gory, but perhaps a little too clean for the grindhouse feel of the comic. If you like your vampires to look smoking hot before they eat people, look no further. I suspect if you listen closely you could hear men all over the world tearing out the panels from this book and pinning them up on their walls. Or at least I hope that’s what they are  doing with them. Anyway, the art is fantastic.

This book brings the sex and the gore and is not afraid to use either. I am definitely looking forward to more tales of Vampire Vixens of the Wehrmacht.

For More Information: Check out the website: http://www.vampirevixens.co.uk/. PDFs can be purchased and downloaded for international customers.