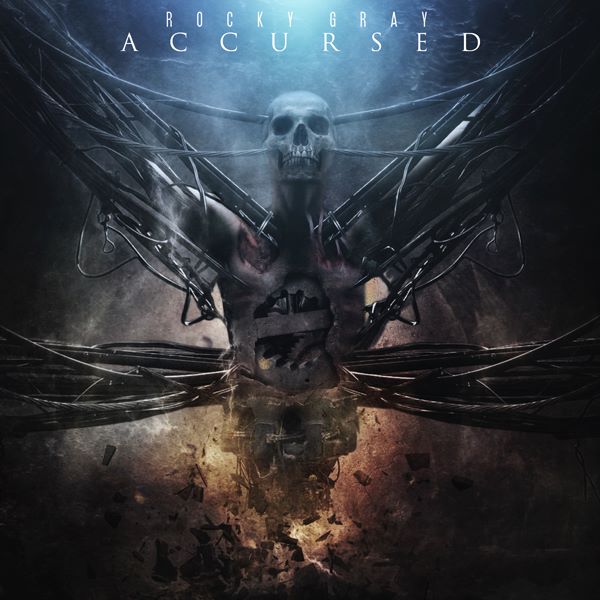 The concept of the imaginary soundtrack is such a cool idea; it’s a wonder that more musicians don’t indulge in making them. Creating music to a film that only exists in the imagination must allow artists to give full reign to their most visionary of sounds, unencumbered by the demands of directors, editors, or movie studios.   Artists as diverse as Barry Adamson, David Holmes, Olivia Tremor Control and Symmetry have all conjured up pretend cinematic music for the mind and body, while entire labels like Cineploit have created their own alternative soundtrack universe, releasing scores for films that never were but should have been.  Stomping all over this genre of conjecture is the newest release from Rocky Gray, Accursed. Gray is a one man metal machine, a multi instrument virtuoso who has played in a variety of bands such as Shredded Corpse, Living Sacrifice, Soul Embraced, Mourningside, We Are the Fallen, Evanescence, and Machina, and this wealth of musical experience informs the different styles featured on Accursed.  Clearly, Gray is not only a music aficionado but a horror film connoisseur too, as the selections on Accursed sound like they have been ripped right out of the belly of the grindhouse.  Starting off with the Fabio Frizzi goes industrial pound of “Cannibal,” Accursed references icons of horror film music like Goblin, John Carpenter, Ennio Morricone, and Claudio Simonetti , but establishes an original atmospheric sound that is referential but not slavishly imitative. Gray’s ability to genre hop from punk-metal to synthesized orchestration to euro disco to dissonant slabs of noise keeps Accursed exciting and unpredictable. Perhaps the finest tracks on Accursed are “Cemetery Ghoul” and “It Ends with an Exorcism,” songs that had me convinced I had heard them in Lucio Fulci’s gory epics but are solely the products of Gray’s sinister sonic palette. Rocky Gray’s Accursed allows us to experience the joys of horror soundtracks but free of the overpowering visual associations that film music often has, encouraging the listener to be the director and indulge in our own personal dark visions.

Accursed is available on I-Tunes and at http://rockygray.bigcartel.com/