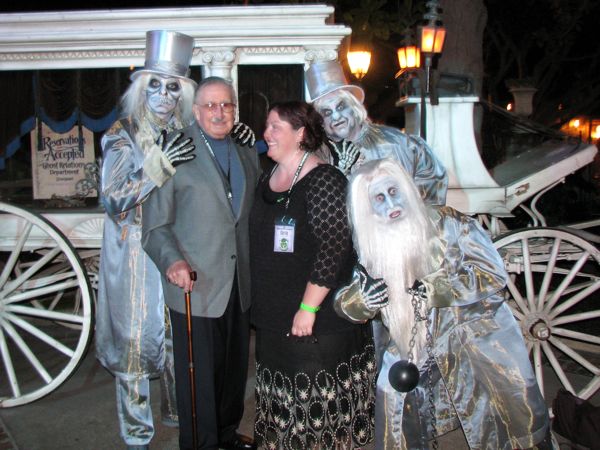 Fans of Disney Parks such as Disneyland and Walt Disney World know that Walt surrounded himself with very talented individuals to help make his dreams a reality. Today, we call those individuals Imagineers… they are responsible for everything from dreaming up a creative new concept to applying the modern science necessary to make it a reality. In the early days of Disneyland, the department was known as WED Enterprises, and all of its employees became Disney legends for their contributions to the park and to the industry in general. Xavier “X” Atencio is one of those legends. For fans of the park, his name is synonymous with two of the parks’ most popular and enduring rides: Haunted Mansion and Pirates of the Caribbean. Horror News Network has received word that Mr. Atencio passed away on Sunday. He was 98 years old.

Although he was born in Walsenburg Colorado on September 4, 1919, it didn’t take long for X. Atencio to move to Los Angeles to pursue an education and career in animation. He was first hired by Disney at the age of 18, and he worked on such classic animated features as Pinocchio, Fantasia, and Mary Poppins. When Walt began to focus on rides for Disneyland, he took Xavier with him. Atencio’s greatest achievements include co-writing the song “Yo Ho (A Pirate’s Life for Me)” and writing the script for Haunted Mansion and it’s famous song, “Grim Grinning Ghosts.” He can even be heard on an overhead announcement at Disneyland’s Haunted Mansion should the ride stop unexpectedly. His script for Haunted Mansion is so legendary, you could always see a fan or two mouthing along the famous phrases of the infamous Ghost Host as they make their way through the ride! And best of all, everyone has a favorite part. For some, it might be the iconic verses of Madame Leota’s seance. For others, it’s the morbid playfulness of the stretching room at the start of the tour.

Although he retired in 1983, Atencio was a staple at Disney Parks celebrations centered on his creations. He was known for his generosity in signing autographs for fans, and he really loved talking about how these classic rides came together. Disney’s official fan club, D23, shared the news of Atencio’s passing through their Twitter site, which links to a detailed obituary from the company:

We are sorry to report the passing of Disney Legend X Atencio: https://t.co/K3AH7JocCC pic.twitter.com/G7Cwwng9lp

Disney Parks wouldn’t be what they are today without the contributions of Xavier “X” Atencio. May he rest in peace, and may Disney fans all over the globe keep him in mind the next time they encounter rowdy pirates or happy haunts on their vacation to a Disney Park!

Disney Bringing ‘The Haunted Mansion’ Back To Big Screen