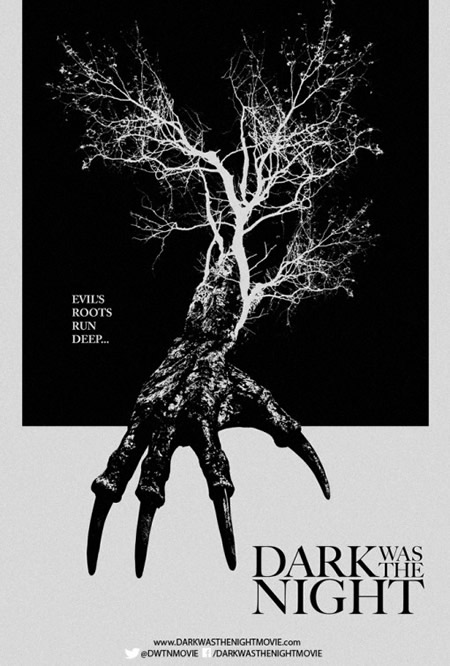 Kevin Durand (The Strain) and Lukas Haas (INCEPTION) star and battle with an ancient evil in the upcoming film that CRAVE ONLINE called “an exquisite creature feature.”  The script, from Tyler Hisel, appeared on the 2009 Black List of best un-produced scripts, a rarity for the monster genre, under the title THE TREES.  Rounding out the cast are Bianca Kajlich (Rules of Engagement), Sabina Gadecki (the ENTOURAGE movie), Heath Freeman (SKATELAND), Steve Agee (@midnight) and Nick Damici (LATE PHASES).

“The overwhelming reception DARK WAS THE NIGHT received at ScreamFest last week clearly shows that we have awakened our core horror audience,” said Campbell.  With its amazing cast and suspenseful plot, we’re confident international audiences will also embrace this heart-stopping horror/thriller.”

The plot of the film begins when a long slumbering evil is awoken in the trees outside the remote town of Maiden Woods. Isolated and threatened, it sets its sights on the townspeople, as Sheriff Paul Shields (Kevin Durand) attempts to overcome the demons of his past, so that he may protect those that he loves.

Elias Axume negotiated the deal for Premiere Entertainment and will be handling foreign sales at this year’s American Film Market.

“We all love a good monster movie, but in this case, we were immediately attracted to the all-new mythology Tyler created in his screenplay,” said producer Dallas Sonnier. “Jack expanded on the source material by exploring the emotional struggle of Durand’s character, while testing the conventions of the genre.  The result is a tense, dramatic, and scary take on a creature feature.”

Of the partnership with Premiere Entertainment, Heller said “Elias and Jack were constantly checking in during the entire process. They have always supported my take on the genre, and we are fortunate that they believed in the finished product and stepped up with a strong plan to position our film in the foreign markets.”