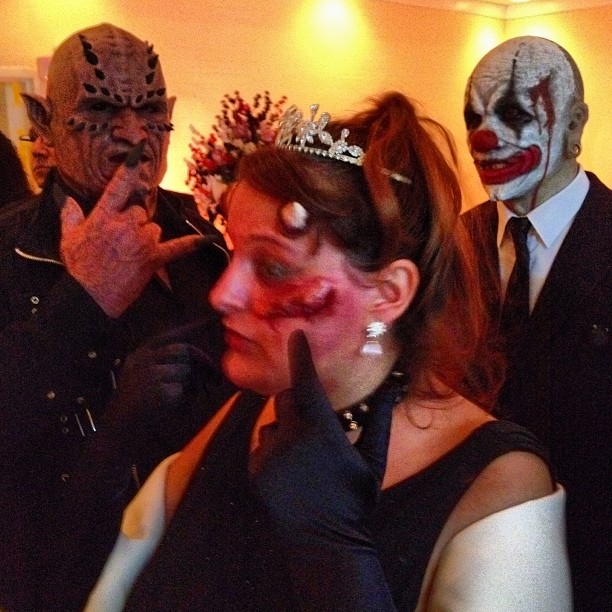 LC Macabre and Adam Ginsberg brought the glitz and glamor of classic Hollywood to independent horror for the Red Carpet Gala to inaugurate the 5th Macabre Faire Film Festival on Friday night.  Directors, actors, actresses, industry people, and horror personalities put on the ritz, whether it was evening formal, Goth couture, Punk chic, or full-on costumed insanity. While flash bulbs popped and paparazzi swarmed, the children of the night sipped champagne, stroke poses for the camera, and spoke with the media, celebrating their enormous creativity and passion for the horror genre.  The festivities opened with a welcome from the “Deadfather” who thanked all the attendees and signaled out special guests actress Eileen Dietz, FX artist Tom Sullivan, and composer Alan Howarth.  Proving that this event was truly unique, a vow renewal between “Baby” and “Zippy” was performed, as the bride and groom shared their reconnection with the adoring audience. After a musical set by Melissa Otero, the award ceremony began with the Macabre Faire Ambassador award going to Eileen Dietz, whose support of the festival was honored. LC introduced a special screening of Manny Serrano’s short film “M is for Mastectomy,” a harrowing depiction of suffering and coming to terms with breast cancer. LC gave a stirring speech about the real life horrors of cancer and yet the tone of her remarks left the audience uplifted and hopeful in the face of adversity. Next was one of the most innovative aspects of the Macabre Faire Film Festival: the 48 Hour Film Race Award. The festival organizers gave filmmakers a challenge: make a short film in two days that has to incorporate a holiday, a red balloon, a shovel, a trophy, and the Powerpuff Girls. Incredibly, many people rose to the challenge and John Sheehan’ s “All I Want for Christmas” and Manny Serrano’s award winning “Grub Vom Krampus” were shown and enjoyed by the impressed viewers. The Macabreite Awards then followed with The Secret by  Andrew Leckonby winning Best Short Film and Brutal by Michael Patrick Stevens winning Best Feature Film.  After some heartfelt acknowledgments of people who have helped the Macabre Faire Film Festival family, it was time for the piece de resistance: a live performance by John Carpenter collaborator and composer Alan Howarth. With a psychedelic background of solarized images from the films he has scored, Howarth played a masterful  set, recreating tracks from Escape from New York, Prince of Darkness, the Halloween series, Big Trouble in Little China, Christine, The Thing, They Live, The Headless Horseman, Brutal, and Retribution.  While the majority of the concert was glorious synthesizer overload, Howarth occasionally picked up a guitar and added extra sounds to the already magnificent mix.  The show was unbelievable, a dream come true for all those horror obsessives who were raised on the ominous soundtracks of the Carpenter epics.  Following Howarth’s concert, the partying went on with screenings of The Red Room Experience and Brutal. A truly magical night and one for the ages. Move over Cannes. Viva la Macabre Faire Film Fest!