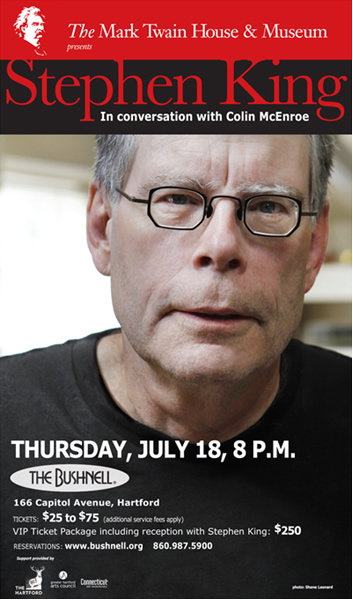 My Night With Stephen King
by: Alicia Banks

On Thursday, July 18, 2013 at 8pm, The Mark Twain House & Museum presented those of us in the audience of Mortensen Hall in Hartford, CT's Bushnell Theatre to a special treat. We had the privilege of listening in on an interview/conversation between WNPR's Colin McEnroe and The Master of Horror, Mr. Stephen King.

That's kind of how it was billed anyway.

To be honest, this fangirl was a little disappointed.

First, the venue itself seemed a little confused and in way over their heads. From listening to the talk as we waited in line to get up to the balcony, the sense of disfunction we all felt was not the norm for The Bushnell. It was utterly unorganized. Since we were not directed upon entering the theatre, those of us with balcony seats looked for the stairs to get up there. We waited in the line for Mezzanine since no other stairs were labeled "Balcony". We got up there only to be directed to a bar area. Once we got there, we realized the only way up to the balcony was by elevator. Apparently, they'd closed all of the stairs from the Mezzanine to the Balcony, claiming they'd only be using them in case of fire.

You can imagine how warm and fuzzy that statement made me feel.

They only let us up the Mezzanine steps at 7:30. We got to the elevator line at 7:40. The elevator came back every 5 minutes. The line was quite long. You do the math.

The evening started off with an introduction, comparing Mark Twain and King. The intro was ended with King's own quote, "I am the literary equivalent of a Big Mac and fries." Laughter ensued. King walked on stage. And the place erupted into screams and catcalls. It was like being at a rock concert. And King loved every minute of it.

As the interview started, King was asked if his use of the name Jack Sawyer in "The Talisman" (screams from the audience here) was intentional (referring to Mark Twain's "Tom Sawyer"), and King responded immediately with a resounding "Absolutely!" He went on to discuss that this specific type of novel, The Quest Novel, is something many novelists wish to write, and he'd written quite a few, such as the 7 books in a series called The Dark Tower (more insane clapping and screaming from the audience here). Once the audience had calmed down, King said, "Before we're done, I'm going to say the names of every single one of my books (laughter from the audience) because it makes me feel like Led-Fucking-Zeppelin!"

And he almost did. Is it still considered name-dropping to mention all of your own books? At first I thought he was just trying to be funny (which, don't get me wrong, he is. King has a great sense of humor and good comedic timing. The audience loved it), but every time he mentioned a book, he mentioned it in such a way as though his audience has never heard of it. It was, well, weird. Dude, people traveled 300 miles for this thing. I think it's safe to say they've heard of "The Stand".

McEnroe spent some time calling King "a romantic", claiming he easily writes about love since he's been married to the same woman for so long (King mentioned he and his wife, Tabitha, married in 1971), and that it must be easier to write about love as opposed to vampires since he's experienced love but never been attacked by a bloodsucker. King disagreed. He said writing about vampires is easy because you simply use your imagination to do it. With that said, his relationship with his wife has had a hand in his writing. He mentioned "Lisey's Story", a novel about the widowed wife of a writer. In 2002, he had pneumonia, and he wasn't expected to survive. He was in the hospital for quite awhile apparently. Tabitha decided to clean out his office, maybe just to have something to do, maybe to get a head start on what would be an inevitable task once King passed. And then King got better. When he arrived home, he walked into his office and saw what she'd done. And that had been the inspiration for the opening scene of the book.

The conversation then turned to God and religion. King is not a part of any organized religion, but people are surprised to find he believes in God. To that, he said, "I choose to believe in God. It's a conscious decision. Because… why not?" He figures he might as well cover all the bases just in case. His delivery was funny, and it kept the audience entertained during a rather serious discussion.

Same went when they delved into politics. King didn't touch too much on the politics of today. Instead, they discussed the Kennedy era and the presidencies around that, referring to his book "11/22/63". He said he never put stock in the whole "Camelot" mentality of the time, and he also believed that Oswald really did shoot and kill JFK on that day in Texas, mentioning his beliefs probably differ from many in the audience. He lightened the conversation up with stories of his devout Republican mother in the days before JFK, how he had worked on Republican campaigns in his early days as well, and finally how his mother had sworn him to secrecy right before she died when she told him she'd started voting Democrat. King even mentioned voting for Nixon, something "my wife is still giving me shit about."

They moved onto the topic of music. Most King fans know how much he loves some good tunes. They talked about the band he plays with on occasion, The Rock Bottom Remainders, and how King had had the honor of having dinner with Bruce Springsteen in a little Greenwich Village restaurant years ago. The story goes like this: they were sitting together in the little restaurant section at the back of this tiny bar, and a mother, father, and teenaged daughter came in to have a special celebration dinner. The daughter was dressed up as if it were her birthday or other equally special occasion. King watched as the girl kept sneaking peaks at their table. Finally, she came over the table, and as Springsteen moved to pull a pen out of his jacket to sign an autograph, the girl asked, "Aren't you Stephen King? It's my birthday. Can I have your autograph?" King said, "For one golden moment, books trumped music."

The interview ended with asking King about some of his favorite things, such as:

Favorite movie adaptations of his books: Stand By Me, The Shawshank Redemption, The Green Mile, Misery, and Cujo

Favorite foods: Waffle House because "When you go in there, they leave you alone. The menus are waterproof, and they have pictures of the foods you can choose."

Favorite places: NYC, Hartford (all except for taking I-84 – haha), and Sarasota

The evening ended rather abruptly with McEnroe saying they'd run out of time at 9:30 on the dot. Run out of time? Who's time? We were all like, "What?" And then it was just over.

Did I learn anything new about King? Yes, I did. Was I entertained? Yes. I do have to say though that many of the questions and the way the answers were given are interview questions and answers I've already read before over the years. It was a bit of a letdown. It felt like stock. To me, this thing was made out to be a pretty big deal, so for the conversation topics to be centered around things that have been beaten to death (yes, they discussed Kubrick's "The Shining" AGAIN) seemed a waste of King's time. I was like, "Dude, he's already been asked that. It's printed on the internet a bajillion times."

Still, I can now say I've been in the same room with not one but two of my favorite authors (I had the honor of watching and listening to Neil Gaiman read and share the stage with his wife, Amanda Palmer, at Bard College this past spring, and it was sensational!), and so it was a good night. I hope the other audience members, especially those of whom I was squeezed into an elevator, enjoyed it as well. As I sprinted out of the theatre to get to my car and hightail it out of there, the Hartford fireworks were being set off, having been rescheduled due to rain around the 4th of July. It was an unexpected but welcome surprise as I drove onto I-91, and it made me smile. I hope King ran out to catch some of them because it was a spectacular show.