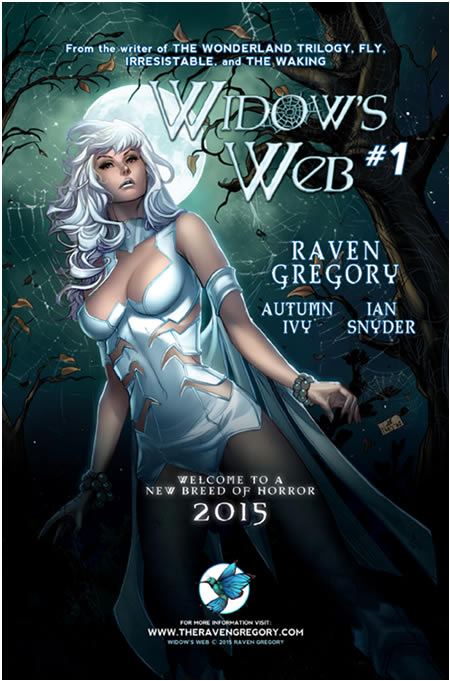 Stephanie Shamblin Gray: So nice to see you writing again! Can you tell us a little about your latest story, Widow’s Web?

Raven Gregory: It’s the classic love story of boy meets girls wrapped in a monstrous horror fantasy except in this case instead of girl meets boy, girl may actually EAT boy.

Stephanie Shamblin Gray: I have to ask: how do you pronounce the name of the city, TCESNI?

Raven Gregory: (Ses-Ni) The Tc comes together to make an “s” sound. The real trick on the name isn’t on how to pronounce it though….

Stephanie Shamblin Gray: I can’t wait for the reveal! There is a huge cast of characters here. Could you give us some highlights?

Raven Gregory: It’s a nice mixed batch.  In Widow we get to see the girl next door gone bad, the hopeless romantic fall in with love with his worst nightmare, and the HBIC (head-bitch-in-charge) lose a little bit of the roughness when she gets to see the softer side of things. No matter your taste there is someone here that you can see parts of yourself within.

Stephanie Shamblin Gray: This looks like a great team for this book! Tell us about working with your collaborators and co-writing with Autumn Ivy.

Raven Gregory: It’s a real blast.  Different than anything I’ve done before.  It’s strange, we’ll usually get together and try to get work done and nothing gets done but the second we sit back and relax and start talking shit the story just starts to pour out of us in a very ethereal organic way.  We do a lot of polish after that initial brainstorming but the final product is pretty much that conversation between two friends

Raven Gregory: Broken Butterfly Comics is my new brand and imprint that I’ll be releasing all of my new creator-owned series in the future through various publishers.  It’s kind of my own personal mantra for new beginnings and that even something broken can go on to become something new and beautiful if you just give it time.

Stephanie Shamblin Gray: Where and when can readers pick up the Widow’s Web?

Raven Gregory: Widows will begin a Kickstarter on February 27th and from there you can find it at your local comic retailer or online at theravengregory.com.

Stephanie Shamblin Gray: Anything else you’d like to tell us about Widow’s Web?

Raven Gregory: Get ready for a whole new spin on what horror can be.

Stephanie Shamblin Gray: Sounds great! Thank you for talking to us, Raven!