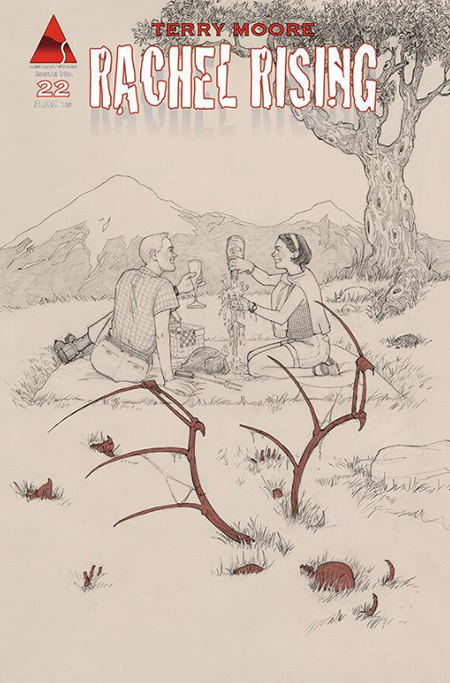 Synopsis: The truth behind Manson’s infamous witch burnings of 1693 comes out when Rachel finds the final piece of the puzzle six feet under. Will it help her save the town from Lilith’s revenge? Find out in the newest installment of Terry Moore’s acclaimed horror series!

Our Thoughts: Hot on the heels of its triumphant win for Best Ongoing Series in the Horror Comic Awards, beating out popular favorite The Walking Dead, issue 22 of Rachel Rising hit the shelves of comic shops. Terry’s Moore’s fantastic series never disappoints and this issue is no exception. The plot continues to twist and the impossible continues to happen at every page turn. As usual, the series stays grounded in the development of the characters even if the characters hardly continue to remain themselves.

In this issue, we go back in time once again to see Rachel/Byrn Erin’s time with James and Lilith and learn that things were somewhat different than how Rachel remembered them previously. Luckily, we now have James in Jet’s body, uncomfortably as you would imagine, to explain it all to Rachel. Without spoiling the twist, Moore has managed to add yet another layer of emotional vulnerability to these physically invulnerable characters. And speaking of characters inhabiting others, Aunt Johnny’s spirit is still in the missing dog, Priscilla. I’m hoping both Johnny and Priscilla make it through the next issue but also bracing for the worst. The characters tend to survive longer in Rachel Rising than in other comics based on the story, but the tides of change may be upon us.

Rachel Rising is a series that is easy to recommend to everyone. It has a level of depth that is uncommon in most comics. However, this is not a comic that you can just pick up and jump into and expect to be able to follow. Do yourself a favor and go pick up the trades of Rachel Rising and get sucked into the mystery!