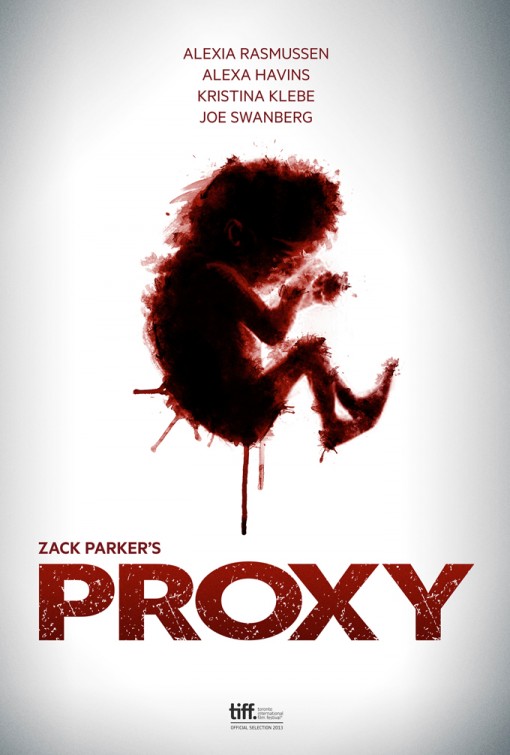 What starts out as a depressing foray into the crippling psyche of a parent who loses their child, ends up becoming a study in selfishness and lunacy in Zack Parker’s dark drama Proxy.  The characters, as well as the audience, are forced onto a roller-coaster of emotions as each deal with the horrific grief of loss in their own unique and twisted way.  In this film, nothing is as black-and-white as it seems, and virtually nobody is who they pretend to be.  It is a very good effort by Parker and the cast, and is sure to leave an impression on anyone who watches it (especially those who are parents).

Proxy is split into two acts: a Hitchcockian-type thriller/mystery for the first half, and a tough and depressing revenge story for the second.  The story presents vividly how people deal with and act upon loss and betrayal, and the violent and cringe-worthy consequences that could result from their actions.  Esther Woodhouse (Alexia Rasmussen) is reeling from a brutal assault that left her physically drained, and led to the loss of her unborn child.  As she attends grief support groups, Esther becomes infatuated with Melanie (Alexa Havins), a mother also dealing with the untimely death of her child.  A downward spiral of sanity and control ensues, as each have their mental states and personal lives unravel in spectacular fashion.  Both women have a significant other (Melanie’s husband Patrick, and Alexia’s girlfriend Anika) that bare the burden of their lover’s psychosis and ill-fated choices.  A spectacular finale sees the zig-zagging plot lines intersect in explosive fashion, and the after-effects felt by the viewer are indeed long-lasting.

As a parent, I have to say that there are multiple scenes in Proxy that were tough to watch.  The assault on the street in the very beginning is a particularly memorable and sickening display, and seriously forces you to question humanity.  But as I mentioned, in this movie the most innocent characters turn out to be the most wicked and manipulative, while the most dangerous and impulsive become perversely-honorable in their final moments.  Babies and children are used and portrayed in shockingly vile and disturbing ways, a rare sight today in American cinema.  There are a couple of entertaining twists, which serve to answer questions that have you shaking your heads in inexplicable disbelief for the majority of the film.  These twists aren’t ostentatious enough to ruin the mood, and don’t take you out of the story at all.  In fact, they enhance it (very un-Shyamalan-ian).  Mid-movie action contains a bloody and normally climactic scene (if it wasn’t occurring so soon, that is) that play a bit too artsy for me with excessive blood splatter and painstakingly slow-motion action.  It’s not a slam dunk shot, but certainly a lay-up with authority by Parker.

The cast of Proxy is good, with Rasmussen’s creepy portrayal of Esther depicting just how empty and delusional a “grieving” person can be.  Of course, appearances are sometimes misleading as ulterior motives are discovered over time.  She is certainly the very definition of this. This is the the true brilliance of Esther, as her presence is felt while both embraced and reviled throughout the entirety of Proxy.  In this way, Havins’ Melanie is yin to her yang, flip-flopping roles while being pulled deeper and deeper into madness.  Joe Swanberg (V/H/S) and his portrayal of Melanie’s husband Patrick can be a bit much at times with the seemingly over-the-top grief theatrics; overall, however, he flips a switch when tragedy strikes so the contrast is justified.  Who are we, after all, to determine how a father should properly mourn over the loss of his only child?  Proxy is a true psychological thriller, with enough gore and violence to appease the horror crowd.  And the subject matter, of course, will both attract and repel even the most hardcore film fanatic.

A killer effort from Parker and the cast, Proxy is one of the reasons why people think that independent movies are leading the pack.  The gutsy subject matter and heart-wrenching imagery combine to pack a powerful punch.  While I’m not sure if I could sit through a second viewing because of real-life parallels, Proxy is certainly a film that I’d recommend to anyone interested in alternative cinema.  And it would help if you didn’t have children, as well.