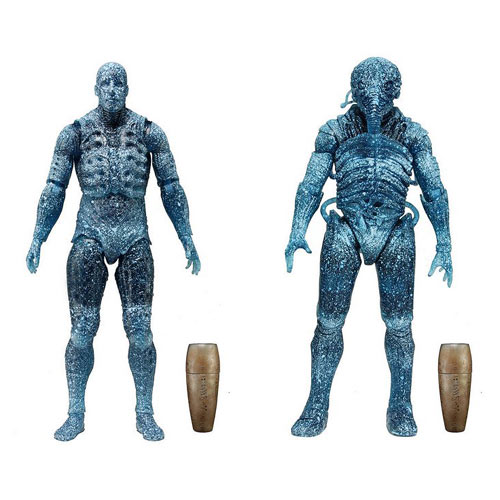 We received word of these cool looking Prometheus figures coming in October. read on for the official details.

Holographic versions of the Chair Suit and Pressure Suit Engineers in action figure form! Using a combination of translucent blue plastic and hand-painted decoration to achieve the look of "white noise," the holographic projections of the Engineers from Ridley Scott's sci-fi movie Prometheus make their action figure debut in this Prometheus Series 3 Action Figure Set! Both the Chair Suit and Pressure Suit Engineers are included in here in their holographic form as seen when the crew of the Prometheus discovers archival footage of what lifeforms were active on LV-223. Each figure measures over 8 1/2-inches tall and features over 20 points of articulation; plus, each Engineer also comes with an Ampule accessory which can be opened to reveal the mysterious contents inside! Both are contained in collector-friendly clamshell packaging. Ages 17 and up.