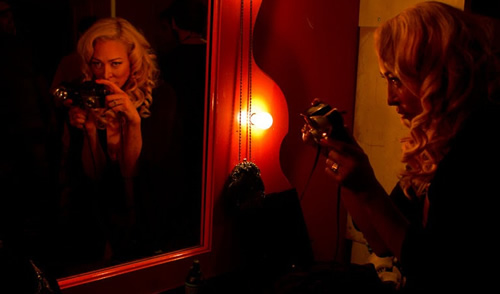 “We are wrapped on FETISH FACTORY, my 5-day feature film wonder-shoot for the fab BBP,” said FETISH FACTORY Director Staci Layne Wilson. “What a way to make a directorial debut: pinup girls, multiple costume changes, burlesque acts, singers, bands, claustrophobic ‘haunted house’ horror with a big cast, zombies, beauty and F/X makeup, bloody death scenes, stunts and humor –! I think my next movie should be about one character in a phone booth or something…WHEW!”

“FETISH FACTORY was more fun than I could have ever imagined,” added Jennifer Blanc Biehn. “It’s a really exciting film featuring pinup models versus zombies. And I’m so proud of our cast. We pulled together an incredibly talented ensemble of people and I’m excited to get in to the post process and see what Staci can do.”

The story centers on pin-up vixens vs. bloodthirsty zombies, and is set in post-apocalyptic Hollywood. Imagine a wickedly saucy by invitation-only stage show and posh private peeps in which every fantasy can come true, fulfilled by the likes of luscious ladies imitating the sex goddesses of yore: Bettie Page, Jayne Mansfield, and Suzie Wong. Along with classic burlesque strip-teases and curio acts – a ventriloquist, a magician, and a whip-dancer – you are in for the night of your life at the Fetish Factory. That is, until the apocalypse strikes! Once mild-mannered men become bloodthirsty zombies and it’s up to the girls to defend themselves by any means – even if that means turning their bullet bras, garter belts and spike-heels into deadly weapons.

Chase Williamson who plays Jake in the film said, “I had a blast filming Fetish! Such a fun set!  I can’t wait to see it!”

Daniel Quinn who plays the Footman said, “Jennifer Blanc and Michael Biehn – together they bring the talents of Artistis back to the legacy of the art in making films! The “Old Hollywood, today”. Jennifer Blanc and Michael Biehn bring their family of artists to fill their slate of ongoing films, so the vibe on the set is super relaxed and uber creative, even though it may only be a one week production. I was honored to be a part of Jennifer and Michael’s production Fetish Factory!  I have enormous respect for their talents as artists, and their business savvy!  They make being a part of their film endeavors a creative blast. Great energy on the film set, with an outstanding cast and crew!  Jennifer and Michael are two of the most down to earth, caring people you will ever meet and have the pleasure of working with in the Entertainment Industry!”

“FETISH FACTORY was one of the most fun and enjoyable shoots I’ve ever had,” said Ruben Pla who plays the Whipping Boy. “The location was such a blast to work in, so much character in that old house, the great backyard with all the sofas where we could all hang out, and the great costumes the girls and guys wore really popped onscreen. Working with my friend and director Staci Layne Wilson was a totally satisfying and creative experience, and my character of “Whipping Boy” was one of the most fun I’ve ever sunk my teeth into. Jennifer Blanc-Biehn did a fabulous job both producing and performing in the film. The big scene where the girls are doing their shows onstage and we’re watching them and drooling was such a hilarious and enjoyable time that I didn’t want it to end…ever.”

Emma Jacobs, “Suzie” in Fetish Factory, added, “My character is the new girl of the group who is sweet, eager, and learning the ropes from the other girls. Her burlesque persona is based on Suzie Wong. It was a pleasure working with Staci Layne Wilson and Blanc Biehn Productions. This was such a wonderful crew and a lovely cast. I’m very much looking forward to seeing this film come to life on the screen!”

“What a wonderful experience we all shared working on Staci Layne Wilson’s debut feature: Fetish Factory,” said The Richard. “My expectations were quite high since this was my very first visit to Los Angeles, but may I say that every single experience far surpassed my expectations. This was one hell of a fun, creative and soul bonding endeavor…. and I have made new friends through this professional gig, many of which I will keep close to my heart and nourish for many years to come. On top of having the opportunity and luxury of playing my lovely self with a cameo in this film, I got as requested a beautiful, loving and sultry entourage of a cast. What’s more, I had the great opportunity to finally meet two larger-than-life starlets that had managed to grasp my full attention within the past year or so. Miss Jennifer Blanc Biehn and Little Miss Risk… Tristan Risk. Hot damn, they were everything I had wanted them to be. Thank you very much Staci Layne Wilson for your vision and passion to all that is beauty and fun with the crazy, happy go lucky world of all that is Burlesque, humour and horror. I absolutely adored collaborating with you and your FF family and will greatly look forward to our next endeavor together.”

“Fetish Factory” is in post-production and will be available later this year.