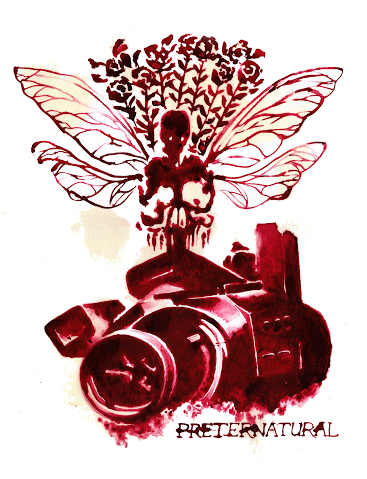 Preternatural is the inaugural release from Faster Indie, in conjunction with Deadbolt Films and A   Gang of Giants. This is Deadbolt Films’ second full-length release. It was filmed in and around Surrey,    England in the summer of 2015. Preternatural was filmed using a Canon 600D DSLR camera, using a    variety of zoom and prime lenses. The shooting format was 1080p, 24fps (1920×1080 master) . 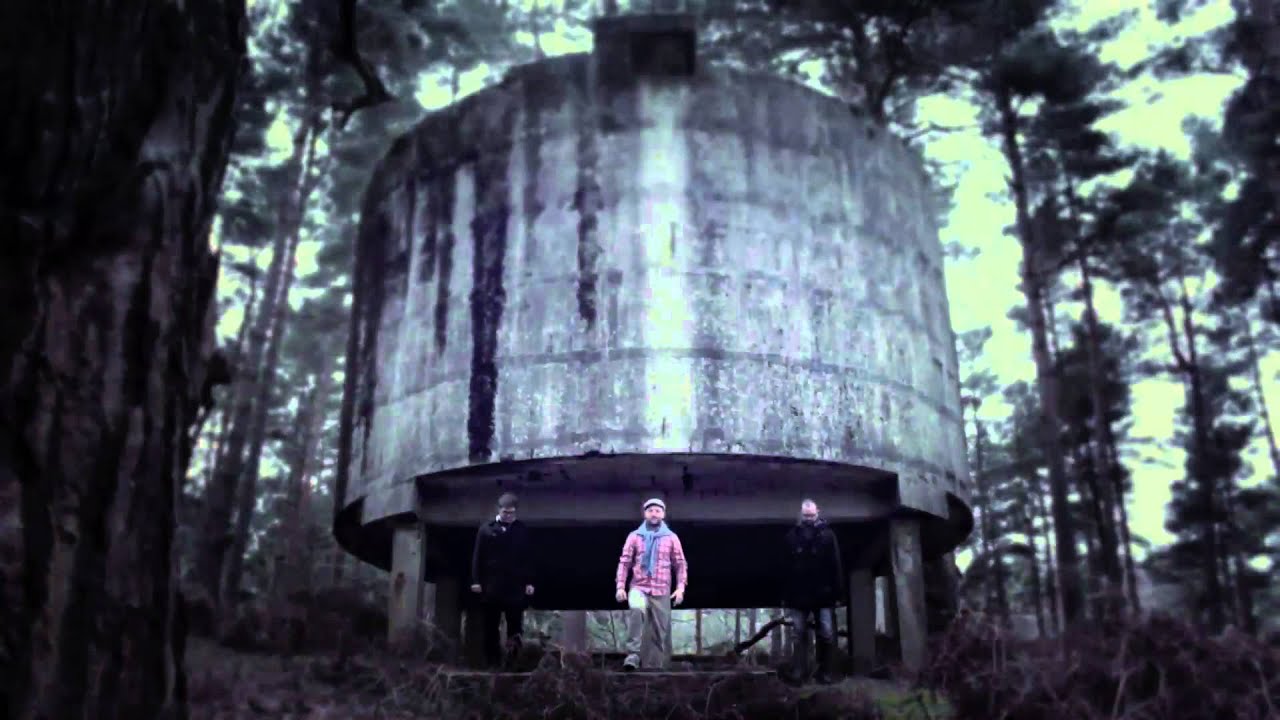 When amateur film-makers Gav and Dixon set out to make a Blair Witch-style horror spoof about the   preternatural, they find out that Mark- one of the actors they have hired – is not all he seems. After a    misunderstanding, Mark destroys the video camera Gav and Dixon have been using and the line    between reality and fiction becomes increasingly blurred. A genre-bending voyage into the unknown    ensues, as the ‘reel’ and the ‘real’ collide.

Inspired by the early independent cinematic stylings of John Cassevettes, writer/producer Dixon    Barker says, “I sought to create a screenplay that was inherently more improvisional in nature,    something that had an overarching structure, but ultimately could be played with by myself and the    actors as required; much like the characters in the film – being pulled between the ‘real’ and the   ‘reel’.”

Dixon Barker states, “More than anything I wanted to create a character-based horror. To me, the    recent crop of horror/fantasy cinema seems to negate character in favour of jump scares or gore.   Structuring the screenplay around a miniscule budget meant that dialogue had to feel natural and    character development and interaction was key when creating a low-budget feature that people    could invest in.

“Having grown up on the ‘kitchen-sink’ stylings of Ken Loach, Mike Leigh, Nic Roeg, Shane Meadows   and Andrea Arnold, as well as the comedy efforts of Monty Python, The Comic Strip collective, Black   Adder, Only Fools & Horses and The Office, I recognised that we in the U.K have a rich heritage of    genre-defining material. Looking at some of my favourite horror: The Wicker Man, Don’t Look Now    and the Hammer House of Horror series, it was important to try and channel my influences and   a distinct ‘Britishness’ into Preternatural. Satire, sarcasm, self-deprecation and a distinct rumbling of    bleakness were all key factors when penning the script. Equally, having had the chance to undertake   a course with Monty Python contributor and BBC stalwart Bernard McKenna, I felt it important that    an air of absurdity underpin the narrative,” asserts Dixon Barker.

The jarring mid-point twist and key talking point for Preternatural “seemed like an obvious choice,”   explains Dixon Barker. “I sat down and considered what devices I hadn’t seen in a horror film before,   what would scare me, what might speak to a current consciousness and what a film would be like if   you removed the camera – would the actors cease to exist? Would the audience still be there? The    notion of becoming ‘trapped’ or unable to ‘get back’ to your own reality is not necessarily a new    concept, however, I’d not seen it used in the way it’s used in Preternatural before. With the    meteoric rise of the internet and particularly social networking sites the desire to be known or    become famous is at an all-time high. Mark’s desire to ‘perform’ for an audience, or orchestrate an    event so horrific that it could leave its actors dead, for me is in some way representative of a not-too-distant future. Even a cursory glance over the video content appearing on certain internet sites    is not a million miles away from Mark’s antics in Preternatural.”

Preternatural is Gav C. Steel’s second feature as director. Gav’s first feature; low-budget 1970’s   inspired slasher, The Shadow of Death was released in 2012 under his own Deadbolt Films and    played at the Making Waves festival in the U.K and the Killer Film Fest on-line.

Gav’s short films, while underpinned with horror themes, have been extremely varied in nature.    From the chilling Monitor, one of the few shorts to be selected for the Calgary Horror Con 2015, to   the sci-fi inspired space-romp Sexton Lovecraft. Gav’s 2014 short Tinnitus is featured on the World of    Death compilation released in 2015 on DVD and Blu-ray.

Dixon Barker states that, “I knew Gav had worked within a range of low-budget styles before, so he    seemed the perfect candidate to direct Preternatural. Having seen his ability to handle almost all   aspects of film including acting, editing, production and sound engineering it seemed like a great   idea to have a director on-board that could not only envision the finished product, but could also   work on almost all areas of the production too, keeping a consistent vision throughout.”

The casting process for Preternatural was, much like the movie, something inherently organic and   slightly left-field. Since the two lead characters would essentially be playing comically exaggerated    versions of their real-life personas, it seemed like an obvious choice to build a cast around people    who knew Gav and Dixon in real-life, or who were willing to get to know us both in and out of the   movie.

With almost 60 film credits to his name Ben is the most experienced member of the cast, featuring    in Nick Love’s The Firm, Vendetta with Danny Dyer (Wasp, Severance, The Business) and performing    alongside Shaun Williamson (Extras, The Invention of Lying) in Jayde the One Hit Wonder. Working as    an actor, director, producer and writer Ben brought a multitude of perspectives on set as well as a    professionalism to make the role of the Executive his own. Ben notes, ” I had fun doing my scene for    Preternatural and I’m very chuffed to be a part of the production.”

Mark comes from a stage background and is an old school friend of writer/producer Dixon Barker.    Standing in within a day’s notice to perform as the lead in Ben Elton’s theatrical production of    Thoroughly Modern Millie – for which he was awarded the GTG Millennium Award – Mark’s ability to     perform under pressure was vital during the production of Preternatural. Mark’s ability to deliver    take-after-take really shone through when filming. Despite rehearsing for a production of Daphne Du    Maurier’s Jamaica Inn while shooting Preternatural, Mark always brought a boundless energy to set    and willingness to better his performance. While not being involved in a wealth of comedy material   prior to Preternatural, his comic timing was spot on and helped raise many a laugh on and off-set.    Mark’s versatility and enthusiasm meant that switching between the seemingly polarised personas     of his on-screen character Mark came as second-nature.

Preternatural’s director also stars in the film along with Dixon Barker as the lead protagonist, playing    both Gav and Gavin. The relationship between Gav and Dixon and Gavin and Paul’s characters in the     film draws directly from the relationship Gav and Dixon have in real-life. The in-fighting and general    silliness between the characters of Paul and Gavin in the spoof within Preternatural called on Gav’s    talents in improvisation. Gav comments that, “it was fun re-treading some of the conversations and    petty arguments Dixon and I may have had in real-life. Dixon and I bounced off one another    extremely well and the improvised scenes ran really smoothly.”

As one of the two leads, Dixon’s role in Preternatural is much like Gav’s, whereby he must play two     marginally different version of himself: Paul and Dixon. On and occasionally off-set Dixon remained    in character as Paul throughout production, pushing Gav to react to his performance. Dixon asserts    “Gav was great to work with on and off-screen. I wanted our relationship as friends to be believable     so as to create an on-screen relationship that people could relate to. The lack of any explicit    backstory between the characters in the film forced me to work on a performance that immediately    established a recognisable relationship between Gavin and Paul and Gav and Dixon respectively. I    felt Gav’s ability to improvise helped this massively and I learnt a lot from the production.”

Having appeared in The Shadow of Death and Gav’s wonderfully eerie Burying the Paranoid and    Tinnitus shorts, John’s strength lies in his versatility and eccentricity; the latter played out in    Preternatural through the character of John’s desire to come to a film audition in full tuxedo regalia.    From the terrible jokes to his unsuitable dress choice, John brings a wonderful awkwardness to his    on-screen persona that only he could deliver.

Having worked with Gav on The Shadow of Death, Jane was keen to get on-board with Preternatural.    Having attended drama school Jane has numerous professional acting credits to her name, but she    cites working on Preternatural as her favourite experience, “having the freedom to make of the part    whatever I wanted was loads of fun and no nonsense. I really thought it was guerrilla film making at    its best. It was a pleasure to work with Dixon and Gav.”

Another The Shadow of Death veteran, Dan’s role, although brief brings a sense of cheeky fun to    Preternatural. While his character appears clueless as to why he’s even at the audition in the early    scenes of Preternatural, Dan’s desire to experiment with different characters on-set brought a    unique energy to the early scenes, as well as some epic facial hair!

As the real-life girlfriend of Dixon Barker, Eva-Rose (Evie) was the obviously choice to play Dixon’s    potential love interest in the film. Evie came to Preternatural with a link to horror cinema, training    with Eva Sayer, star of Tom Shankland’s The Children. Evie’s background in dramatic monologue and    duologue readings certainly helped with her verbal sparring with the character of Jane in

Dixon Barker’s real-life father was selected by Dixon because, “only my own dad could play someone    with the surly disposition that the janitor required.” True to form Robert hit his small role perfectly

Brian’s work speaks for itself. From co-producing the festival favourite Neo Ned with Jeremy Renner    to working on cult British horror-comedy Dog Soldiers, Brian has an eye for emerging talent which is    second-to-none. Brian’s input and support throughout filming was invaluable to the production of    Preternatural. Brian was quick to spot the on-screen chemistry between Dixon and Gav and his    suggestions combined with knowledge of the industry, led to subtle changes in Preternatural’s final   edit that would appeal to a wider audience.

Dixon Barker comments, “Brian approached Preternatural from a different angle to Gav and I. Being    the other side of the Atlantic and having different sensibilities regarding film, Brian could spot some    key points in the film that worked and others that needed tightening. Working with someone who    has such a knowledge of both the genre and the industry – having worked on both U.S and British   productions – was invaluable, and we were delighted to have him on-board.”

During production the crew had to re-schedule shootings due to Universal Pictures Huntsman filming   on the same day in the same locations. One of the Preternatural’s latter scenes had to be reshot    since Nick Frost and Chris Hemsworth could be seen riding horses in the distance.

Despite appearances to the contrary Dan Bone’s over-sized facial hair is his own.

John Brown’s wardrobe choice for his character’s audition scene was not scripted. John turned up on   the day in full tuxedo, with a cup and saucer in tow.

A number of the scenes between actors Dixon Barker and Gav C. Steel were simple improvisations   between themselves not originally intended for use in the final movie. It was with gentle persuasion   from friends and family they found their way in.