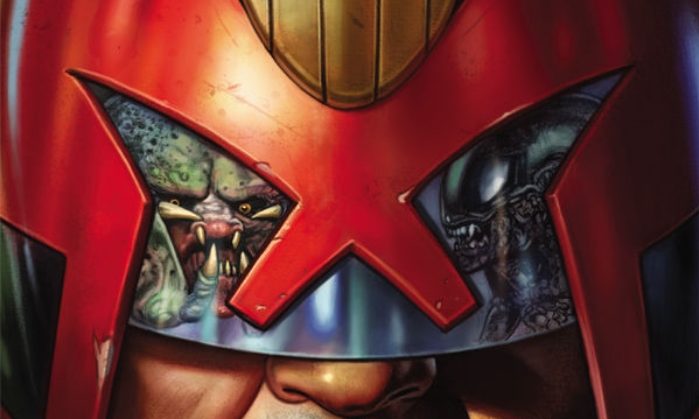 Synopsis: 80’s sci-fi/horror icons and the top cop from Megacity One thrown down in this messy mash-up!

Our Thoughts: I have never been a fan of cross-overs between two companies or intellectual properties.  Even as a young reader of comics, I was never interested in seeing Superman meet Spider-Man because I knew that it wouldn’t last.  I was (and still am) a big fan of continuity within an established universe.  You can imagine that the last few years have been difficult for me as a long time comic book reader, bearing witness to multiple “new universes” and a wiping away of years of continuity and story lines.

Despite these feelings, there was one crossover from February of 1990 that caught my attention and held it: Aliens vs Predator.  The first appearance of this combo came in the form of Dark Horse Presents #36.  I was hooked from the start, especially when Predator 2 was released later that year which contained a tantalizing “Easter egg” for fans.   Remember, this was a  time before “Easter egg” was even a word in the geek lexicon, so when viewers caught a brief glimpse of an alien skull in the Predator’s ship…man, it seemed like the comic actually stood a chance of becoming “real”!

All those perspiring fans did eventually get an Alien vs Predator film and the results were, how should I say, a little less than satisfying… And the most consistent question/complaint that was heard in 2004 was “Why didn’t they just adapt the Dark Horse comics?”  Dark Horse continued to publish cross-overs, but the film effectively killed the comic franchise as Hollywood, of course, knew better than fans and comic creators.

Cross-overs between intellectual properties have not gone out of style however.  IDW, Dark Horse, and others have continued to match-up film and comic properties due to the simple equation that more fans equals more sales. And if you can match-up two, why not three!  This is what IDW and Dark Horse attempt to do in this crossover between Judge Dredd, Aliens, and Predator.  Unfortunately, sometimes less is more.

John Layman is a competent writer with great success with his creator-owned title Chew and an extended run on Detective Comics, but the story here seems like one that is too unwieldy (or convenient) to manage.  The story starts with a Predator on the run from some half-man half-animal creatures straight out of the High Evolutionary’s lab or Dr. Moreau’s Island.  I haven’t read a Judge Dredd story in at least 10 years, but I don’t remember man/animal hybrids being typical residents of “the Cursed Earth” (mutants, oh they’ve got mutants) but it is possible I missed them.   The standard mad doctor, cloning, and a variety of Alien prisoners is a quick way to start a story, but also a common one.  Dredd does show up in the second half of the story and it contains typical “Dredd-justice” and Layman certainly gets this character’s delivery and attitude right.  Next issue promises the intersection of all of these properties, and the preface includes a professional wrestling announcer style introduction to the three combatants, so if you’re looking for “splice and dice”, this may be the book for you.  Chris Moneyham’s art captures the action and creatures well and he should be able to handle the upcoming throw-down between these three titans with plenty of blood and limbs flying.  If you are looking for more substance, try a stand-alone story from any of these ever-popular characters or creators.