As reported by the Hollywood Reporter, Preacher co-creator and artist Steve Dillon is dead at 54 years old.

Dillon’s untimely passing came as a shock to many in the comic community and is even more tragic due to the recent success of AMC’s Preacher series.  Entertainment Weekly quoted DC Entertainment Group Editor Marie Javins saying that “His name, along with writer Garth Ennis, is practically synonymous with Preacher,”  said in a statement obtained by EW. “But I know him as a lovable wisecracker who enjoyed New York, and could always be depended on to deliver a sly remark. Steve had a great sense of humor; it’s fitting his last work for DC was a cover of a tin foil Dogwelder. To the rest of the world, he’s a giant among creators and artists. He will be missed by us all here at DC and Vertigo.” 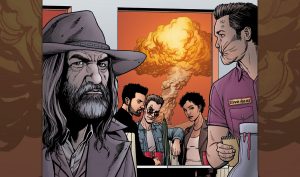 Fellow creators expressed their feelings for Dillon on Twitter with frequent collaborator Warren Ellis stating “I have it confirmed that Steve Dillon has died. He was a giant, and will be much missed.”

Seth Rogan (who serves as a co-producer of AMC’s Preacher) said he was “Devastated by the loss of Steve Dillon. My favorite comic artist who drew my favorite comics. RIP.”

Dillon and writer Garth Ennis created some of the most critically acclaimed comics of the past 20 years with extended runs on Hellblazer and Marvel’s the Punisher.

No cause of death has been announced at this time.