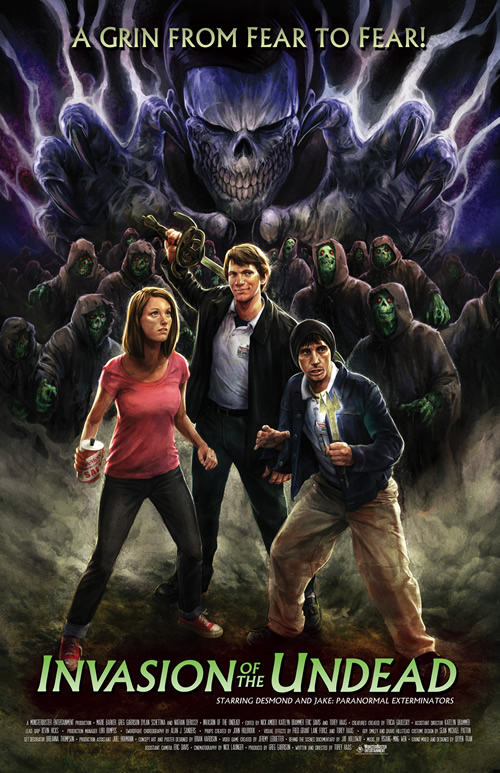 Poster Revealed For ‘Invasion of the Undead’

Independent production company MonsterBuster Entertainment is proud to reveal the poster for its first feature film Invasion of the Undead, an 80’s-style horror comedy in the vein of The Evil Dead and Big Trouble in Little China that features sword fights, stop motion monsters, practical creature effects and video game-inspired boss battles. Currently in post-production, the ambitious $17,000 indie film will receive a limited theatrical release in October 2014 with VOD and DVD/Blu Ray to follow.

Designed by comic artist Brian Hardison (Run by the Gun), the poster was modeled after the painted artwork that graced movie theaters and VHS boxes in the eighties.

Partially funded through Indiegogo, Invasion follows Allison, a young woman who gets more than she bargained for when she enlists the aid of two freelance paranormal exterminators to combat an undead infestation in her new home. It is the first film in a planned four-part series and the cornerstone of a MonsterBuster Cinematic Universe in which characters from past and present MonsterBuster productions will cross paths as the series progresses- think a horror version of Marvel or Star Wars.