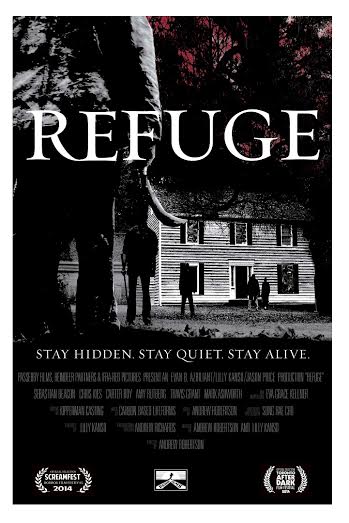 Refuge ?is a post­-apocalyptic thriller from Passerby Films. ?Refuge ?was enthusiastically received by audiences last year at multiple festivals around the world, including fan favorites ?Toronto After Dark?, ScreamFest? and won ?Best Director ?for Andrew Robertson in Sydney at Australia’s ?Fantastic Planet.

Refuge ?has been compared to Cormac McCarthy’s ?The Road? as the austere setting and large cast of villains are reminiscent of the world that film inhabits. Director Robertson says of the post-­apocalyptic universe: “I wanted to focus on a family living in isolation..to portray the quiet fear that would become the default if we all went into hiding after a big societal breakdown. I expect life would become a slow burn, interrupted with bursts of fear and violence.”

Refuge’s distributor, Gravitas Ventures, says of Refuge: “Gravitas is excited to be collaborating with the bold and innovative filmmakers behind Refuge and bring these new voices in horror to 100 million homes across North America.”

SYNOPSIS: Refuge ?chronicles the struggles of a family trying to survive in the wake of a deadly and mysterious catastrophic event that has brought America to its knees. Despite their efforts to remain hidden from the pervasive marauders and dangers that surround them, the family is ultimately   discovered and forced to fight for survival. But, fighting back has its consequences.

*the fight begins on February 16th, 2016, when the film is available through VOD on: iTunes, Amazon Instant, Google Play, Vudu, XBOX live and Playstation Network.